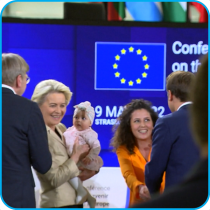 Conference on the future of Europe: What direction should Europe take?

Every 9 May, Europeans celebrate Europe Day. But this year, the celebrations take on a new meaning. Today, one year after it officially began, the Conference on the Future of Europe (CoFoE) comes to a close with 49 proposals being delivered to the presidents of the European Parliament, the Council and the Commission.

This a good time for the Council of European Municipalities and Regions (CEMR) to provide an update on this exercise in participatory democracy and to highlight certain proposals which should define the European Union's agenda in the coming years.

"People need to take ownership of Europe", said Manuela Bora, regional councillor for Marche (Italy) and a member of the CoFoE plenary, on 5 May at a meeting of organised by our French Association (AFCCRE) and the Strasbourg Eurométropole.

"The most sensible choice, in my opinion, is to make the Conference on the Future of Europe a permanent body within which it is possible to continue to share ideas, especially the most controversial ones", Ms Bora said. "A participatory debate between local authorities, citizens and the European institutions is the best guarantee for concrete and far-sighted results. And this is why CEMR has developed its six proposals to bring Europe closer to citizens."

Among these, CEMR called for holding every year on 9 May "a debate on the European project, its benefits and challenges, such as how to build a decarbonised society, in every school and in every municipality and region in Europe."

Twinning is also a powerful way to bring Europe closer to citizens. In line with the CoFoE's proposal of "reinforcing existing EU exchange programme", CEMR argues for setting up a genuine Erasmus programme for local civil servants through exchanges between municipalities and regions, twinned if possible.

Another proposal promoted by CEMR: the development of European universities beyond the two Colleges of Europe and the teaching of languages such that by 2050 every European speaks at least English and two other European languages, in addition to his own mother tongue.

While ideas are not lacking, these still need to be formalised and consultation with civil society organisations and local governments needs to be made systematic. As Manuela Bora stressed: "If so much has been done in just a year, imagine what could be done in a permanent structured system! And that's exactly the direction we need to go in."

This event, entitled "The Future of Europe: The Vision of Local Governments",  gathered representatives of local governments and civil society, among which were Antoine Chabal, President of the French section of the European Federalists, Philippe Laurent, the Mayor of Sceaux and the President of AFCCRE, and Jeanne Barseghian, the Mayor of Strasbourg.