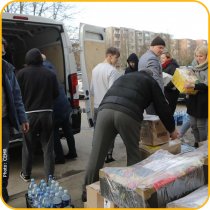 Ukmergė district municipality, in Lithuania, was among the first municipalities in the “Bridges of Trust” Initiative to provide help to their Ukrainian partner, Korosten in Zhytomyr Region.

Korosten was attacked on 25 February when a Russian shell hit a residential building. In the beginning of March, Russian forces fired on a TV tower and checkpoints in the city, killing and wounding at least four. This was followed by an air strike on the city.

Ukmergė is helping to address the urgent needs of its partner through "Ukmergė-Ukraine" campaign, which has found a wide support among the local people and businesses.

The humanitarian help was sent for the first time on the 7th of March. It included hygiene products and non-perishable food. On the 1st April, a second cargo left Ukmergė municipality, with food packages, flour, groats, soups, sugar, canned vegetables and meat, hygiene products, medicines, clothing and shoes. In total, Korosten already received 5 tons of humanitarian aid from Ukmergė.

“Ukmergė district municipality sent us a very substantial help and we are currently in the process of creating individual packages which will be distributed to the internally displaced people.”, said deputy mayor of Korosten, Nataliia Chyzhevska. “We sincerely thank Ukmergė district and Lithuania for their help.”

The support campaign "Ukmergė-Ukraine" continues. The municipalities are also planning to sign a partnership agreement on 29 April 2022.

The two municipalities first met in November 2021, in the framework of the “Bridges of Trust” Initiative, implemented by Council of European Municipalities and Regions, PLATFORMA and supported by the U-LEAD with Europe programme.