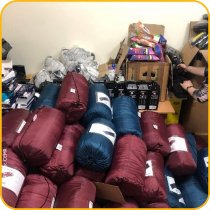 Šiauliai district municipality in Lithuania has given over 11 tonnes of humanitarian and material aid, worth around 100,000 euros, to its Ukrainian partner, the city of Dolyna in southwest Ukraine.

“We are sincerely grateful to our Lithuanian friends from Šiauliai district, our brothers and sisters, for the significant help we received”, said Ivan Dyriv, mayor of Dolyna. “This is an invaluable contribution of our friends, of the Lithuanian people, to our common victory, the victory of Ukraine.”

In addition, as a gesture of support for Ukraine, Šiauliai district municipality terminated all cooperation agreements with partner municipalities in Russia and Belarus in the first days of the war.
​
The two municipalities first met in November 2021, in the framework of the “Bridges of Trust” Initiative, implemented by CEMR, PLATFORMA and supported by the U-LEAD with Europe programme.