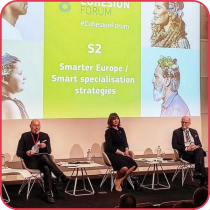 Following the publication of the 8th Cohesion Report, the EU-wide coalition put forward a series of joint observations towards the 8th Cohesion Forum, which takes place on 17 and 18 March. Members of the Alliance welcomed the positive results highlighted by the report: less-developed regions in Eastern Europe have been catching up , the number of people at risk of poverty and social exclusion fell by 17 million between 2012 and 2019, and economic modelling indicates that in 2023 GDP per head will be 2.6% higher in less-developed regions thanks to recent support from the EU's cohesion policy.

However, several middle-income and less developed regions in the south of the EU have suffered stagnation or decline, caught in a form of development trap. The local and regional capacity in economic development is still uneven, and key challenges remain to be addressed if no one and no region is to be left behind.

The future of the cohesion policy will be closely linked with a possible reform of the EU economic governance framework. Nevertheless, there is no acknowledgement of the role of the EU Semester in the implementation of cohesion policy, the #CohesionAlliance pointed out, arguing that local and regional governments will have to be formally involved in the EU economic governance and will need their investment capacities to be strengthened.

The European Commission's strong message to reinforce multi-level governance and partnership principle is timely and reassuring, members of the Alliance said. However, this acknowledgement comes in contradiction of the recent trend of the EU to recentralise the management of its funds and policies back to Member States – a trend evident in implementation of the national recovery and resilience plans and in the development of the upcoming national Social Climate Plans.

Members of the Alliance said that it remains to be seen how the new concept proposed by the European Commissioner for Cohesion and Reforms, Elisa Ferreira, on the “do no harm to cohesion policy” will effectively be applied across all other EU policies that have an impact on territorial development and at local level.

The President of the European Committee of the Regions (CoR) and Governor of the Region of Central Macedonia, Apostolos Tzitzikostas, said: "This report shows that cohesion policy works, but also that all EU policies must help reducing social and economic gaps. People need EU, national, regional and local actors to work together to create jobs, fight poverty, and bring the green and digital transitions in every region, city and village across Europe. This policy is the only EU policy that heavily invests on this cooperation. The pandemic - as well as the tragic situation caused by the war against Ukraine ordered by a ruthless regime – have proved how vital cohesion policy is for the EU to cope with both emergencies and longer-term change."

For his part, the President of the Council of European Municipalities and Regions (CEMR) and of the Emilia-Romagna Region, Stefano Bonaccini, said: "We are not yet out of the pandemic and we have imagined everything but a new war in Europe. The crisis we have experienced in recent years show that European cohesion policy is more relevant than ever in the long run and that it must be strengthened in the years to come. It is a policy that connects European citizens to Europe through municipalities and regions. It is our best tool to pursue the European project and strengthen local democracy. "

Since its creation in October 2017, the #CohesionAlliance – an EU-wide alliance of 12,000 signatories advocating for a stronger cohesion policy – has managed to avoid dramatic budgetary cuts after 2020, helped maintain a cohesion policy that benefits all regions in the Union, and advocated simpler and more flexible rules for cohesion funds.