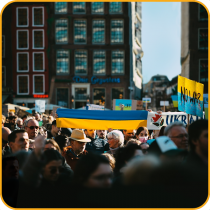 700 mayors and local or regional leaders from across Europe have united around Ukraine by signing the Council of European Municipalities and Regions’ (CEMR) call condemning the Russian invasion and pledging to support Ukraine and the Ukrainian people.

The moral and political condemnation of Russia’s aggression has been overwhelming. Signatories include the mayors of Lisbon, Paris, Tbilisi, Cologne, Cluj-Napoca, Gdańsk and Reading as well as the chairs and vice-chairs of 25 national associations of local and regional governments.

While towns, cities and regions across Europe are symbolically lighting up their public buildings blue and yellow in solidarity with Ukraine, they are also providing concrete support by hosting Ukrainian refugees and giving financial, humanitarian and material aid to Ukrainian local and regional governments. CEMR is coordinating this response with its 60 member associations from 40 European countries.

Stefano Bonaccini, president of CEMR and of the Emilia-Romagna Region, said: “Faced with the reality of war, municipalities and regions across Europe must scale up their financial, humanitarian and material support in response to the growing needs of Ukraine’s people and local governments. This mobilisation demands greater coordination between European, national and local levels to ensure optimal efficiency and to avoid scattering our efforts.”

Ukrainian Mayors at the forefront

Ukrainian mayors and local workers are continuing to provide essential services to residents in an extremely dangerous environment. This includes distributing food and medicine, evacuation of women and children and urgent repairs to basic infrastructure damaged by Russian bombs.

“The local government continues to safeguard functioning of the critical infrastructure of our city”, said Vitali Klitschko, the mayor of Kyiv and the president of the Association of Ukrainian Cities (AUC). “Public service workers are helping the humanitarian coordination centre, distributing food and delivering send and blocks for territorial defence.”

A video (with English subtitles) of comments from the mayors of Kyiv, Kharkiv and Mykolayiv gives a glimpse of the extraordinary challenges Ukrainian municipalities and their residents face today. These threats to mayors include outright kidnapping by the Russian occupiers, as has occurred to Ivan Federov, the mayor of Melitopol, and Yevhen Matveyev, the mayor of Dniprorudne.

“CEMR wholly condemns the kidnapping of democratically elected Ukrainian mayors”, said CEMR President Stefano Bonaccini. “This is part of an attempt to establish illegitimate alternative government structures in a sovereign country. All kidnapped Ukrainian elected officials must be released immediately.”

Local and regional governments across Europe are mobilising resources for their peers in Ukraine, often in collaboration with their national associations. Municipalities like Przemyśl (Poland), Tampere (Finland) and Šiauliai District (Lithuania) are together donating millions of euros either financially or in the form of direct aid. The city of Kielce (Poland) has for its part provided helmets, bulletproof vests, thermal underwear and medical supplies to its partner town Vinnitsa. These examples only scratch the surface of local action being taken.

European municipalities and regions are welcoming Ukrainian refugees. In border regions, the scale of human movement is massive with an estimated 1.5 million refugees in Poland alone. These territories will require support to host refugees in the best possible conditions.

Further afield, countless municipalities across Europe are taking action. For example, in Gent a city platform has been created for residents to register their flat to host refugees. The city of Paris is offering free transport and crèche spaces for refugees. Coordination with the national government is often taking place through our national associations.

Local government associations are crucial for mobilising and coordinating action

Associations of local and regional governments are emerging as important players in coordinating the actions of municipalities and regions. The Association of Ukrainian Cities has been sharing information on the needs of the country’s municipalities. Meanwhile, the local government associations of several European countries have donated funds to AUC. Other associations, such as in Austria and Latvia, are mobilising their networks to participate in the Operation Snowflake. This operation consists in writing to Russian mayors and council chairs to call on them to stop the war.

Coordination between local, regional and national governments is crucial to identifying and sharing the needs of people in Ukraine and maximising our impact. CEMR is mobilising and exchanging with its members on how European municipalities and regions can best respond to the war’s impact. We are working on, among other issues, support for Ukrainian municipalities and the hosting of refugees fleeing Ukraine.