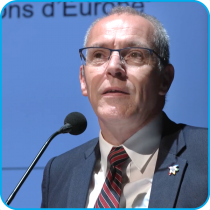 On 31 January 2022, Frédéric Vallier ended his second mandate as secretary general of the Council of European Municipalities and Regions (CEMR). In a letter addressed to the CEMR members, partners, friends and colleagues, he looks back on 12 years at the service of local and regional governments in Europe.

"After two mandates serving local and regional governments and their associations, it is now time to say good bye, it has been an honour to serve CEMR for those last 12 years. I would like to thank all of you for the confidence you gave me along all these years.

I would like to thank my colleagues and former colleagues who supported me all along these years, the “dream team” from the secretariat for the work done, I have tried to be a fair manager, giving each staff member the possibility to develop their ideas and projects in the best manner, sometime pushing them to the maximum to give their best, launching new ideas that came up in one of my troubled nights. I would like also to thank all the colleagues from member associations for their support and understanding, it was not always easy but I enjoyed the discussions and debates to find sound compromises respecting the diversity we represent.

CEMR is a family, and like in every family, we have debates and discussions with good shared moments and sometimes also more difficult times. It has been the main part of my life those past 12 years.

Along these years, we have built a strong organisation, recognised by the European and International institutions, thanks to our mobilisation for Sustainable development, Cohesion, the fight against Climate change, International cooperation to name a few of the issues where our action had a meaningful impact to support the building of a fairer Europe.

Equality has been a driver for me, and I am particularly proud that we made this organisation the first one to apply equality of women and men in its statutory bodies, there are still progress to be made obviously but I think we contributed greatly in promoting equality and diversity in both our political leadership and our secretariat.

I would like to thank our partners with whom we have reinforced the role of local and regional governments in the governance of Europe and at global level: our sister organisations, UCLG and all the regional sections, NALAS, but also the AER, ABRE, CPMR and Eurocities with whom we have built meaningful coalitions; Climate Alliance, Energy cities, Fedarene, Iclei Europe, our partners on the European and Global Covenant of Mayors, Climate Chance and Iclei World with whom we have ensured the representation of LRGs in International Climate fora; our 30 partners from Platforma including the AIMF, CLGF, UCLG, UCLGA who share with us the priviledge to be strategic partners of the European Development Policy, the successive teams of Devco and Intpa who helped us strengthening this strategic partnership; the Members of the European Parliament, in particular the Chairs and members of the AGRI, BUDG, DEVE, ENVI, FEMM, LIBE, REGI Committees; Jan Olbrycht and the members of the Urban Intergroup; the European Movement International where we bring the voice of LRGs and who brings the voices of citizens in our meetings and work; our institutional partners, the Congress of Local and Regional governments and the Committee of the Regions; the OECD, UN Habitat and other UN agencies; OLA with whom we have published so many studies and research. And all the others I might have forgotten in this long list...

I would like to pay tribute to the elected representatives who give their time and energy voluntarily to the organisation, in particular the Presidents who have been subjected to my sometime iconoclastic ideas and my repeated requests for representation in this or that meeting: Michael Häupl, Wolfgang Schuster, Annemarie Jorritsma, Inigo de la Serna and Stefano Bonaccini.

I would like to say a special word to my French friends, I want to thank them for their support, in good times as well as in difficult ones.

I leave with a sense of achievement, even if I would have liked to continue, that is no secret, but I take note of the Presidency's decision and I wish good luck to the new Secretary general, Fabrizio Rossi.

CEMR's richness lies in its ability to bring together the whole family of local and regional governments, whatever their size, their functions and the status of their country in Europe. I have always regarded national associations with the same respect, there are no small associations in CEMR, there are only members united together to defend democracy and local and regional self-government. There are no members of the European Union and the others because WE are Europe, a Europe united beyond our differences, a Europe made of exchanges, friendships and common battles.

Finally, I wish to thank all those who sent me messages and presents in the last few days, they have warmed my heart!

I wish CEMR the best of luck, we will meet again one day soon because I will not stop carrying the values that are ours.

Thank you all and good luck!"