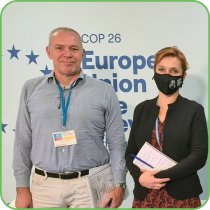 “Disappointment” was a word on the lips of many at the closing on the COP26 UN climate conference in Glasgow in Saturday (13 November). The outcomes leave open many questions regarding national governments’ commitments. Local and regional governments were able however to effectively mobilise during the conference. Thanks to their advocacy efforts, the importance of municipalities, regions and “multilevel and cooperative action” is recognised in the new Glasgow Climate Pact.

“We, local and regional governments, should be proud that the Glasgow final agreement includes the multilevel cooperative model as a way forward to achieve the Paris Agreement objectives”, said CEMR Secretary General Frédéric Vallier, who was present at the COP. “This is a real achievement for municipalities and regions, regardless of the conference’s mixed overall results.”

The final text has been signed off by 197 countries (from the big emitters such as China and the United States to the small island nations). It aims to keep global temperatures at 1.5 °C above pre-industrial levels by the end of the century, the aspiration of the Paris Agreement, but fails to be more ambitious.

Reacting on social media, Léonore Moncond’huy, Mayor of Poitiers (France), spokesperson of PLATFORMA and representative of Cités Unies France said: “The Glasgow Pact does not at all measure up to the climate emergency. While it was supposed to ‘save the 1.5 ° C target’, it is once again mortgaging our future by subjecting it to states’ diluted and disingenuous commitments. Without immediate action, soon + 2.7 °C.”

Earlier last week, Moncond’huy met with UN Secretary General Antonio Guterres and UN Executive Director Maimunah Sharif in Glasgow, expressing the need to support local governments as frontline workers on climate challenges. Her arguments were later echoed in plenary by Sadiq Khan, the Mayor of London: “The involvement of cities now is like day and night ... nothing compared with the past.”

Local and regional governments and their associations were widely mobilised. CEMR, PLATFORMA and the Global Task Force led by UCLG were well represented at COP26 and co-organised numerous side events and bilateral meetings.

The Glasgow Climate Pact recognises “the urgent need for multilevel and cooperative action” as well as the important role of local and regional governments in realising the Paris Agreement. As highlighted by Steven Heddle, Member of Orkney Islands Council (COSLA) and CEMR spokesperson on territorial development, this will require facilitating local governments’ access to climate finance.

“Local governments need revenue, resources and long-term loans. With these tools, we can contribute more to the objective of reducing emissions before 2050”, said Ronan Dantec, CEMR spokesperson on climate, French senator and president of Climate Chance, during one of the sessions.

The Pact includes many other provisions, such as developed countries agreeing to double funding for climate adaptation and a first global commitment to cut methane emissions by 2030.

The next COP will take place in Sharm El-Sheikh, Egypt. Africa being the world’s youngest and most rapidly-urbanising continent, COP27 will focus on booming demography, sustainable urbanisation and financing green plans for sustainable low carbon development. The United Arab Emirates (UAE) was selected to host the COP28 in 2023.