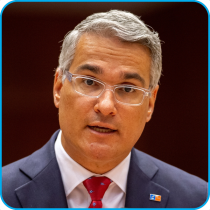 MEP Pîslaru: "The Commission’s efforts to determine national governments to be more open, more transparent and to involve regional and local governments has intensified"

With loans and grants worth €750 billion, the Next Generation EU recovery plan constitutes an historic act of solidarity for our continent to face the dramatic impact of the coronavirus pandemic, but also to accelerate the digital and green transitions.

Since its adoption, several MEP have shown their concern about the lack of involvement local and regional governments in coronavirus recovery plan. We have discussed with MEP Dragoş Pîslaru to understand what concrete initiatives is the European Parliament undertaking to ensure that the National Recovery and Resilience Plans (NRRPs) fully involve the local and regional level.

What do you see as being the main priorities for the European Parliament’s Committee on Economic and Monetary Affairs (ECON) over the next 12 months that are of particular importance for local and regional governments?
Our ECON Committee has been extremely active during the pandemic and I dare say even proactive. But most importantly, Renew Europe was among the first group to understand the importance of finding new methods to create new own resources of the Union. Following the adoption of the Recovery and Resilience Facilities, we start looking at this new instrument as an upgraded model of economic governance. I believe that this is the most important debate we need to see upcoming on the table: how to best shape the EU economic governance, taking into account the design, governance and modus operandi of the RRF.
The creation of a specific Working Group to monitor the Recovery and Resilience Facility (RRF) is an important means to monitor the implementation of the national plans. How is this Working Group preparing for the mid-term review of the RRF in 2022? How can we ensure that does not become a purely box-ticking exercise?
We thoroughly analysed the plans sent to us by the European Commission, we had regular exchanges with the Commissions’ experts working on the RRF to raise questions for the measures proposed for each pillar. We also had a debate on the involvement of local and regional authorities and civil society organisations in the design and implementation of the national plans. Furthermore, we had several debates in the plenary, one specifically linked to this matter of dialogue between the governments and citizens in the context of the RRF, we adopted several resolutions. Now, we plan to work on a Resolution that will constitute the Parliament’s position for the mid-term review.
How confident are you that the “Recovery and Resilience Dialogue” with the European Commission will enable the European Parliament to access all the information needed to properly conduct its scrutiny role?
This dialogue is of extremely importance to us, as it represents the Parliaments’ possibility to bring to the attention of Executive Vice-President Dombrovskis and Commissioner Gentiloni our conclusions following the exchanges of the working group, our concerns and also our demands. The Dialogue is our tool to understand the Commission’s position and action on several key issues linked to the implementation of the RRF and for the Commission to be transparent. Most importantly, the Dialogue was mainly created for the citizens, so that they can follow themselves what the European Union is doing with the national plans, once they are sent by their countries.
A year ago, President von der Leyen said that local and regional governments should be at be at the heart of our recovery. What advice would you give to CEMR’s members seeking to play their full role in ensuring that the funds are well targeted and efficiently spent?
I wish to thank CEMR members for their role and help in designing the Facility. I have received numerous requests from local and regional authorities during the RRF negotiations in which they were making proposals on how to improve the Regulation. I positively responded to as many dialogue invitations as I could, as I honestly believe that you play an essential role in the economic and social recovery after this pandemic. My one and only advice is: DO NOT STOP. The same way you urged me to take action on several issues, the same way you should monitor the activity of your national governments, write them, communicate with them and get involved as much as you can.
In the letter sent earlier this year by the Renew Group to the European Commission, you request that local and regional governments should be better involved in the implementation of the plans and any future changes to the plans. What was the reaction from the Commissioner Dombrovskis?
Indeed, the letter was sent first and foremost with that purpose in mind, to raise the awareness on the fact that a specific provision of the Regulation is not being implemented by national authorities as they should. Executive Vice-President Dombrovskis positively responded to our letter and we also had a dialogue on this matter, in which he explained how the Commission acted in order to ensure that this RRF provision was respected. Following the letter and the exchange, the Commission’s efforts to determine national governments to be more open, more transparent and to involve civil society organisations and regional and local authorities intensified.
The Covid-19 pandemic has halted the EU’s budgetary rules and allowed Member States greater flexibility on their levels of debt and their expenditure ceilings. How can tighter budgetary ceilings be aligned with the spending needed to set Europe on its path towards green and sustainable recovery?
The rapid evolution of the pandemic highlighted the need for a solid economic governance, but one that also understands and allows flexibility, as designing rules applying for all possible circumstances proved to be tricky, difficult and not manageable. I believe that, once the COVID-19 crisis is over, we need to focus on reducing high public debt ratios, we need public finances that promote public and private investments, combined with reforms. We should also aim to reinforce counter-cyclicality in the EU fiscal framework and to design a strong, simpler and more transparent fiscal framework.