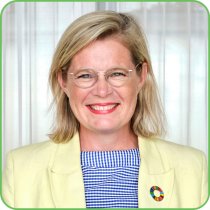 Co-creating the green transition with cities: a conversation with Mayor Sari Rautio of Hämeenlinna

Sari Rautio is chairperson of the city board of Hämeenlinna, a mid-sized city in Finland, and CEMR spokesperson on environment. She spoke with us to discuss the many actions her city is taking for a sustainable future and the reasons she signed the Green City Accord. Read on to discover one among countless examples across Europe of how the goals of the Green Deal are being realised from the ground up!

How would you describe the city of Hämeenlinna?

Hämeenlinna is the oldest inland city in Finland, rich with history and beautiful nature. We not only have forests but also over 300 lakes within our city limits! We have 70,000 inhabitants and are close to the population centres of southern Finland; so in many ways we combine the advantages of urban and country life.

We have a diversified economy that includes agriculture, traditional industry and new innovative sectors. Many people commute to or from neighbouring areas to work, making traffic and railroad networks very important. So, between the nature, a diverse economy and logistical challenges, we face many environmental issues.

What are you doing for the environment in the city of Hämeenlinna?

Because of our situation we have been taking a wide range of environmental actions. We had already been taking steps to reduce our footprint in the previous years, but at the beginning of 2020 we created the city's programme to become carbon-neutral.

Heating for example represents 40% of our emissions. Earlier this year we changed the district heating system, which is very popular, so that 95% of the heat comes from renewables, mainly from biomass such as wood. We also have a local company which is making biofuel from waste.

We all have an impact on the environment in some way. But how can local governments engage people to become part of the solution?

I am a strong believer in cocreation with companies and citizens. That's how we developed our carbon-neutral programme. For example, our city the steel company SSAB has a big plant in our city which plans to become carbon-neutral by 2027. No one can achieve the green transition alone. It's through such cooperation that we be able to reduce the emissions from heating, traffic and industry.

In addition to action by the municipality and companies, the third big thing is to get people involved to make sustainable choices. We have an old saying in Hämeenlinna: "The big things are small, and the small things are big." Small actions can have a big impact. That's why we are working with kids, educating them about the UN Sustainable Development Goals (SDGs) and we can each live more sustainably.

Hämeenlinna has always been a city where people want to do their share but are also very independent-minded. That's why raising awareness is so important and can have such a big impact.

There are several advantages to working with the Green City Accord. First, it's a way to combine all the big and small things we are already planning on environment into one coherent package.

Second, it's a way for us to build a community with other cities, compare what each of us has done and learn from each other. It's important to understand the similarities at European level but also what is different and why things aren't done the same way everywhere. And it's important to stress European cooperation.

Third, it's great to highlight each city's actions on environment as something people can be proud of. Particularly in these times of isolation with corona, it's important for people to be proud of their home city and what we achieve together.

The European institutions are passing a huge range of measures as part of the Green Deal, including on climate, energy, transport... What's your local perspective on these kinds of measures?

The most important thing is that we cannot do these big changes only at one level. National governments and the EU do the legislation but the implementation is local, as are the innovations. That's not only local governments, but also companies, NGOs and the people. That's why it's so important that cities are involved. Cities are the glue that combine all these stakeholders. Cocreation is key here.

In general, European and national legislation should be more about the goals and be less specific about how we achieve them. Local conditions vary a lot and we don't always know yet what are the best ways of achieving these goals. I hope being goal-oriented will be the new normal in public policy by 2030. This changes the whole system towards more strategic work.

What challenges do you face regarding water management? Do you think the European legislative framework is fit for purpose for local and regional governments?

In Finland, wastewater management is in a very good position. The biggest water issue is the Baltic Sea and the pollution there. In the Committee of the Regions, I started the Baltic Sea Interregional Group as chairperson with members from all states around the Baltic.

Our slogan: "Make the Baltic Sea the first plastic-free sea!" Plastic is a terrible symbol of pollution and the idea of eliminating it from our seas inspires me a lot. And that is something that no country or administration can do on its own! Innovations are crucial here, to collect plastic from the seas, reform our waste system and produce substitutes for plastic.

Finland is one of the few EU countries in which local and regional governments were consulted in the design of their national recovery plan. What kinds of projects did cities and regions propose to further the green transition?

There are 18 regions in Finland and each has done their recovery plan, which were then combined into a national plan. This process has worked well. We are funding a wide variety of measures for railroads new industries, agriculture and digitalisation, which will also have a positive environmental impact.

I am really happy that the recovery package is so strongly intertwined with the Green Deal. We have to stick to that and not let countries do too little or choose the easy way out. What worries me a bit now is actually getting started. How long will it take to actually disburse the funding and materialise the projects?

The recovery plan is a great example of how we can work together to achieve great things. As individual cities and countries, we are too small by ourselves. But together as Europe, we can change how the world flows!