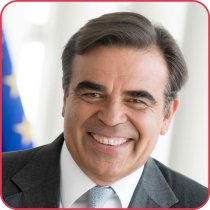 EU Vice-President Schinas to local leaders: “We need frontline soldiers like you!”

In recent years, Europe has faced the most serious migratory crisis since World War II. Immigration is a complex issue which has had a profound local impact in countless municipalities and regions.

That is why CEMR’s Policy Committee met on Thursday (25 February) with the EU Commission vice-president responsible for migration, Margaritis Schinas, to discuss the local realities of immigration, how this phenomenon can best be managed and how EU policies can be most supportive. “Today Europe does not have a common position - we only have a patchwork of solutions,” said Schinas.

CEMR has been calling for a common and impactful European asylum policy at all levels of government since 2015. Five years after the peak of the migration crisis, the European Commission finally presented the long-expected Pact on migration and asylum in September 2020.

During the conversation, President of Karlsruhe County (Germany, RGRE), and  CEMR Co-President Christoph Schnaudigel welcomed the proposed measures for strong and efficient external border protection as well as the solidarity-based sharing of responsibility.

However, the so-called fresh start is also lacking in certain respects. Dr Schnaudigel called for a balanced sharing of the burden and for listening to local concerns in the amendment and adoption of the migration package “because it is local and regional authorities dealing with all the consequences and impacts of the European rules on the ground.”

Migration is a local reality

New arrivals land in the heart of particular communities and as such migration has become a living reality for local government. Municipalities, regions and local communities have to manage developments on the ground, providing access to basic services, accommodation, health care, education.

The discussion focused on two regulations of particular interest for local and regional governments: one covering the screening of third-country nationals at the EU’s external borders and the other on the granting of international protection to refugees.

The two members of the European Parliament responsible for these files also participated in the discussions, agreeing on the crucial role of local governments for newcomers, especially in setting up humane reception facilities during the asylum requests. MEP Fabienne Keller of France stressed local governments’ responsibility for “taking care of unaccompanied minors, deprived of their families.”

Her parliamentary colleague MEP Birgit Sippel of Germany considered the Commission’s proposal unbalanced, with excessive focus on border controls and not enough on solidarity measures, warning of potential refusals of migrants and violations of human rights at Europe’s external borders.

Better cooperation and a humane approach

Local representatives called for the respect of human rights and dignity – prioritising vulnerable groups such as children and their families, unaccompanied minors, women, elderly persons and people with disabilities. President of Seine-Saint-Denis County Council and CEMR spokesperson on inclusive societies Stéphane Troussel suggested we switch focus from debates on returns to how to welcome and integrate these people in local communities. The local French leader proposes to transform the EU’s Asylum, Migration and Integration Fund (AMIF) to focus less on security and more on hosting migrants and supporting their lasting integration in society. As with structural funds, AMIF spending programmes should be genuinely localised by being negotiated with and managed by local governments.

The leaders of the Belgian city of Schaerbeek, the Spanish of Fuenlabrada and Seine-Saint-Denis all called for coherence and coordination between European, national and local levels. The reception and integration of newcomers has also been a priority for other destination areas, notably Swedish municipalities and regions. CEMR is working to boost the exchange of good practices among municipalities with varying degrees of experience to improve migrant integration with the EU-funded project IncluCities.

Getting the issue of migration right is our common task. Regardless of the division of responsibilities between the national level, municipalities and other stakeholders, reception and integration will always be local. To be effective, regions and cities should have the best conditions to be able to welcome newcomers decently. The good news is that the new AMIF covering the years 2021-2027 has already secured 180 million euros for direct funding to local and regional governments working on integration.

From small villages to larger cities, provinces, counties and regions, many have been on the front line of migration by providing immediate emergency assistance to those who are in need. However, some municipalities and middle-sized cities lack the financial and human resources to manage emergency assistance, shelter, medical support and food for the new arrivals.

While migration flows have decreased since 2015, the number of people living in reception centres remains high and often exceeds capacity. Huge concentration creates intractable problems not only for refugees and staff but also for the citizens and host municipalities.

At the EU’s external borders, such as in the Western Balkans, overstretched capacities turned into a humanitarian catastrophe. Today, people are being stranded outside in winter. Ljubiša Ćosić, Mayor of East Sarajevo and President of the Association of Municipalities and Towns of the Republic of Srpska, said this situation proved too great a logistical and financial challenge for Bosnia and Herzegovina.

Local needs on migration management must be addressed and the massive pressure on the first arrival hotspots and municipalities released.

The Migration Pact could be a turning point to reaffirm that solidarity, human rights and the rule of law are the EU’s core values. A united and common approach would ensure that local needs stay at the heart of future actions.

The Policy Committee’s discussion marks the starting point to develop a political resolution on the new EU Migration Pact, so as to partner with EU institutions and work hand in hand with other tiers of government on this critical issue.

Vice-President Schinas urged the building of a genuine partnership between the EU and local and regional government: “We need you! At the Member State level during the negotiations, we need people like you, the frontline soldiers. This can be a win-win situation for Europe.” We are taking that message to heart.

Translate
Video recording of the event.