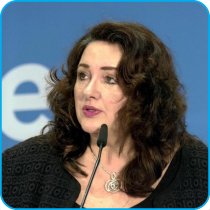 Crisis as an opportunity to improve equality at all levels?: CEMR speaks with EU Commissioner for Equality Helena Dalli

On 26 January 2021, the first EU Commissioner for Equality, Helena Dalli, met with local leaders of the CEMR Standing Committee for Equality to discuss the potential for local and regional action to build equality from the ground up and to identify areas for multi-level cooperation.

Commissioner Dalli presented the main areas her team is working on, particularly the effects of the coronavirus pandemic on women’s involvement in the labour market, their social and economic vulnerability and tackling the “shadow pandemic” of violence against women. The Commissioner also stressed that the pandemic reminds us that home is not a safe space for everyone.

Dalli has already called on EU Members States to ensure that measures are in place to support and protect victims of gender-based violence and she welcomed the efforts already put into place at the local and regional level. “The crisis can be an opportunity to do things differently and ensure that the recovery of Europe is done with a true equality approach,” she said. “As actions at the EU level and regions' actions are closely linked, the cooperation must be enhanced.”

Silvia Baraldi, the new Chair of the CEMR Standing Committee for Equality, agreed wholeheartedly and stressed that local and regional governments, as the level of government closest to citizens, have a shared responsibility for the implementation and promotion of international and European goals. Ms Baraldi explained the mission of the Standing Committee saying: “It is a platform for politicians to exchange about their national situation and experiences, to exchange good practices on equality and to monitor EU policies.”

The session continued with an exchange addressing the backlash against women’s rights currently seen in some Member States, the links between the recently released EU’s external gender action plan III (GAP III) and strategy for gender equality, promotion of women’s political participation in the Eastern Partnership countries and, last but not least, gender and COVID-19.

Magdalena Czarzyńska-Jachim, Deputy Mayor of Sopot (Poland), lamented the reduced possibilities for mayors to promote gender equality in Poland due to the strong opposition on this issue from the central government. The national government strongly supports women in being mothers but not when it comes to return to work and self-development. This attitude is evident in the media and in education, as well as in the distribution of national and EU funds. She proposed the European Commission to think of decentralised distribution of EU funds in order to allow local governments to implement policies in line with EU values.The commissioner reacted positively to this suggestion and indicated that she will discuss the matter further with her colleagues.

Marta Mazurek, City Councillor of Poznań (Poland), reported that last February a resolution of the city council on adopting the European Charter for Equality has been repealed by the governor of the voivodeship (appointed by the central government) claiming that the council did not have the right to adopt such a resolution. The political situation in Poland and the example of Poznań demonstrate the difficulties for local governments to adopt and effectively implement the Equality Charter. CEMR and the members of its Standing Committee are committed to following this issue up as a matter of local autonomy and self-governance.

Ms Mazurek announced the she and her colleagues in the Association of Polish Cities will fight within their human rights and equal treatment commission for Polish cities to adopt the Charter. She also appealed to Commissioner Dalli for support. The commissioner replied with great concern about the current situation in Poland. She was sympathetic to the plight of local governments and committed to do all that is in her power according to the treaties. She recalled the limited competences of the European Commission and the fact that the EU executive cannot interfere in national matters. However, Commissioner Dalli encouraged members of the Standing Committee to come forward and inform her about any situations where the European Commission may have the mandate to take action.

Vice-Chair of the Standing Committee, Emil Broberg, emphasised how the COVID-19 crisis has a clear gender dimension and how it impacts women and men differently. He called for specific measures to be taken and for recovery programs to be allocated in a gender-balanced manner. He reminded that austerity policies have proven harmful to women, for example in the cuts to public sector workers which impact women disproportionately. “These problems need to be dealt at the local level”, he said.

For Commissioner Dalli, the link between equality and recovery is essential. The new EU budget will continue to support equality-related projects including civil society organisations and local and regional governments. “Equality should be at the heart of the response to the pandemic, linked also to the rule of law and the Multiannual Financial Framework”, she said. Collaboration between the European, local and regional levels is furthermore crucial: “The common work needs to be continued to ensure that the response to the coronavirus is clearly gender sensitive.”

The meeting concluded on an optimistic note regarding the upcoming EU programming period and the potential support for local initiatives to achieve shared gender equality goals at local, regional and European level.

Link to the video recording of the meeting: https://youtu.be/WuJH4_tR2R8