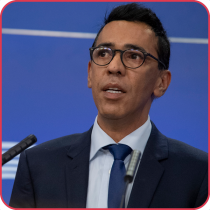 The #CohesionAlliance partner organisations met online to discuss the current state of the trilogue negotiations of the cohesion policy package with representatives from the European Parliament, the European Commission and the German Council Presidency. The partner organisations representing cities, regions and regional assemblies voiced their concern about macroeconomic conditionality, the risk of centralisation and the full implementation of cohesion and REACT EU programmes over the upcoming years.
The negotiations between European Parliament and Council on the rules for cohesion policy 2021-27 are entering the final phase. Cities, townsand regions and the European Parliament have converged on key demands and successfully advocated for strong cohesion policy beyond 2020.
"Concluding the negotiations on all cohesion policy programmes is more urgent than ever. It's less than one months until Christmas, so national governments should stop playing games and listen to its cities and regions. A delay in the negotiations on the cohesion policy regulation risks a postponement of the start of programmes. This would have a direct impact on our citizens, who urgently rely on the EU support. These funds are essential for local and regional authorities to take action against the impact of the Covid-19 pandemic and accelerate a sustainable and socially-fair recovery", said Isabelle Boudineau, Chair of the Commission for Territorial Cohesion Policy and EU Budget (COTER) of the European Committee of the Regions.
Younous Omarjee, MEP, Chair of the REGI committee: "The European Union is going through an economic and social crisis on an unprecedented scale. The conditions for recovery in 2021 are unknown. More than ever, cohesion policy must be powerful, because today what is threatening is the distortion of economies and divergence. The logic of cohesion and solidarity must take precedence over that of competition. The principles of cohesion must be at the heart of the recovery, and we must plead for a recovery that is sustainable, but also fair and equitable."
During the debate with Marc Lemaitre, Director-General DG REGIO, European Commission, and Heinz Hetmeier, Deputy Director-General for European Economic Policy, EU Structural and State Aid Policy, and Twinning at the German Federal Ministry for Economic Affairs and Energy, the #CohesionAlliance partners voiced their concern about some remaining key issues in this last phase of the negotiations. In particular, towns, cities and regions worry that macroeconomic conditionality introduces significant uncertainty on future investment once the Growth and Stability Pact comes back into force. Furthermore, a narrow definition of the scope of the European Regional Development Fund (ERDF) would make key investment ineligible and an ill-conceived flexibility would allow for centralisation and weakening of key tools such as the European Social Fund.
At the same time, managing authorities will face significant implementation challenges as the new programmes 2021-2027 will run in parallel with the current prolonged programmes 2014-2020. The #CohesionAlliance partners therefore call on the European Parliament and the Council to simplify the new regulations as much as possible as well to speed up their adoption.
Further interventions from the conference (alphabetical order):
• Magnus Berntsson, President of the Assembly of European Regions (AER): "In this crisis, it is time to practice the leadership that our citizens expect from the EU and national governments. Time to promote new jobs, competitiveness, sustainable and inclusive growth to drive the recovery. To achieve this, funding must reach our regions, villages and cities immediately. And they must have a say in how best to use the funds."
• Wim Dries, Mayor of Genk and member of the Policy Committee of Council of European Municipalities and Regions (CEMR): "Even when all Member States will agree in the Council, Europe's next long-term budget and Recovery Plan will still have to go through parliaments to become fully adopted and operational. The resulting delay will clash with our urgent needs, in terms of public services delivery and finances. National associations of local and regional governments can help convey the urgency of swift local action to our parliaments."
• Karl-Heinz Lambertz, President of the Association of European Border Regions (AEBR): "The difficulties for recovery in regions with different pre-existing handicaps such as border regions, peripheral, sparsely populated, mountainous, etc., should be considered when planning the allocation of new or extended EU programmes. Territorial cooperation programmes and a new generation of integrated territorial instruments should receive the necessary inputs to accelerate the economic recovery of all territories of the EU and, thus, serve as laboratories for a strengthened European integration. The participation of local and regional authorities and stakeholders in the design and management of these programmes will mean a better identification of the needs to address and the best way to proceed, adding a great value to their implementation while guaranteeing high-quality delivery."
• Ricardo Rio, Mayor of Braga and member of the Executive Committee of EUROCITIES: "We can maximise the impact of future investments, if we target the local needs in times of crisis. For this to happen, cities must have a seat at the table when the decisions about programming priorities are taken. When we work closely together across levels of government, we can ensure that cohesion policy is invested where it makes a positive difference to the quality of life locally."
• Ana Martinez Vidal, Vice-President of the Conference of Peripheral Maritime Regions (CPMR) and Regional Minister of the Region of Murcia: "As Cohesion Alliance Partners, we should keep our efforts to voice the view of the local and regional authorities. A sustainable economic recovery will only be achieved if local and regional authorities have a central role in designing and delivering the investments under the Recovery and Resilience Facility. The Partnership principle and multilevel governance become more important than ever."