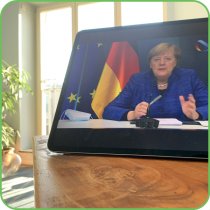 Local and regional Europe made its voice heard this week at the 2020 conference of the European Sustainable Development Network (ESDN), a leading association of public servants and experts dealing with sustainable development issues. This year’s conference was focused on the European Green Deal and featured high-level speakers including German Chancellor Angela Merkel and Director General of the European Investment Bank Christopher Hurst.

CEMR Secretary General Frédéric Vallier was invited to give a local perspective on the EU’s ambitious plans do become carbon-neutral by 2050. Vallier exposed the numerous ways in which local and regional governments contribute to the Green Deal and more broadly to global objectives on sustainable development. He also outlined the kinds of support towns and regions need to fulfill this potential.