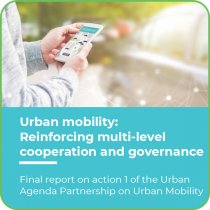 Every city faces the challenges of urban mobility: how can we make sure that citizens can get around quickly and safely every day, while also not harming the environment? That’s why, on the occasion of World Car Free Day and the conclusion of the European Mobility Week, we are publishing a new report on how cities can co-create mobility projects in partnership with other levels of government.

Transport in particular is an area in which a city’s policies may affect and be affected by other territories and by other levels of government. Multi-level governance and cooperation mean governments successfully consult one another and work together.

This is both horizontal – neighbouring municipalities working on a common bus network for example – and vertical – such as a regional government consulting with its municipalities and the national government on a new railway line. Such cooperation naturally leads to more coherent policies that benefit citizens in all territories.

The report examines 10 case studies of successful projects from European cities and makes recommendations for cities looking to undertake their own mobility projects and consult other governments.

Successful mobility plans from across Europe

The case studies look at how city governments succeeded in designing their projects and cooperating with levels of government, with a focus on planning, legal and financial issues. The report notably looks at how cities developed Sustainable Urban Mobility Plans (SUMPs), a strategic tool proposed by  the European Commission. Behind the technical-sounding name is a practical reality: a comprehensive approach to consulting with citizens and other governments, which can also unlock access to EU funding.

Budapest for example completely revamped its planning process in 2013. Over 200 organisations, from local governments to interest groups, participated in the public consultation and discussions. The city was able to tap into tens of millions of euros in EU funds and there has been a significant change in urban planning culture in general: procedures and platforms are now in place for citizens to be much more involved.

The city of Bremen won the European SUMP Award for its plan in 2014. The city authorities were able to cooperate with a wide variety of local stakeholders and peer cities, designing an ambitious plan significantly increase bicycle use and public transport by around 20% each.

Recommendations: engage citizens and other governments

The report also issues recommendations to both urban and European policymakers on how to improve policymaking going forward. For example, local governments working on a common project should setup a platform to discuss issues and reach consensus. More generally, governance structures should encourage cooperation between municipalities.

Local governments also need to work ‘vertically’ with national and EU authorities. Mobility planners should then establish a contact point with the national authorities to inform them about their project and the results. Cities should furthermore join a European network or relevant EU project to build up their planning capacity and exchange with other municipalities.

The report was drafted by CEMR and EUROCITIES as part of the Urban Agenda, an initiative of the European Union which brings together EU, national and urban policymakers. The Agenda aims to give cities a bigger say in EU policymaking, to facilitate cities’ access to funding and to share knowledge and best practices among cities.

The Urban Agenda includes 14 partnerships covering sustainable mobility and numerous other issues relevant to cities, from air quality to security in public spaces. After three years of operation, the EU institutions and national governments are discussing the future of the Urban Agenda, notably whether to maintain the existing partnerships or to create new ones.