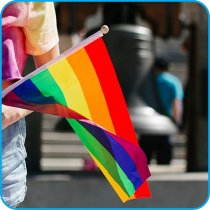 Whereas in Poland around 100 municipalities have instituted “anti-LGBTI” zones or other discriminatory measures, the Council of European Municipalities and Regions (CEMR) calls on Europe’s local and regional officials to support their peers fighting against homophobia.

Frédéric Vallier, CEMR’s Secretary General, and Emil Broberg, Regional Councillor of Östergötland (Sweden) and Chair of CEMR standing committee for Equality, have jointly penned an open letter opposing these measures to Polish municipalities, counties and regions. They call on local and regional governments throughout Europe to express their support by signing on to the letter. To date, CEMR has collected 120 signatures from 14 European countries.

Expressing his view on the situation in Poland, CEMR President and President of the Emilia-Romana Region Stefano Bonaccini said: “Equality is for all Europeans. It is a core European value. As we are striving to build a better and brighter future for all, we simply cannot turn back the clock on human rights and sweep aside decades’ worth of progress.”

“In the world we live in today, equality must be built from the ground up”, said Emil Broberg. “Local and regional governments should not give way to national political movements opposing equality. On the contrary, municipalities and regions can set an example by holding firm to the principles of human rights and to the progress we have made so far.”

Further confirmation of the gravity of the situation came last week with the publication of the European Union Agency for Fundamental Rights’ survey on LGBTI equality, which revealed that 40% surveyed people in Europe said they experienced harassment due to their sexual orientation. In the case of Poland, intolerance towards LGBTI people has increased overall and the country has the highest rates of physical or sexual attacks motivated by the victim being LGBTI (15%).

The open letter also seeks to counter the rise in anti-LGBTI rhetoric. It affirms the signatories’ support for Polish local and regional governments that have rejected and resisted discriminatory measures and who continue to champion the common fundamental European values of freedom and human rights.

Many local and regional officials in Poland are fighting against these anti-LGBTI measures. Marta Mazurek, Municipal Councillor for Poznan, is one of them. “As a Polish elected representative and as a European, I am very grateful for any international support for human rights and gender equal policies”, she said. “Such support energises our efforts and fortifies our courage.”

With this action, CEMR calls for dialogue and invites European cities who have relations with the concerned Polish municipalities and regions to raise the issue. Local and regional governments across Europe should share their experiences in addressing issues of discrimination and equal rights, for the benefit of all.

Traduire
CEMR member associations and European local and regional elected representatives who wish to endorse this open letter against homophobia by filling out this form.