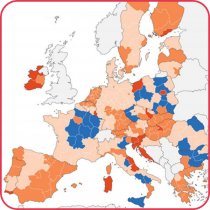 Eurostat has just released some revealing data on the state of regional disparities in Europe, both in terms of wealth and employment.

The reports are categorical: regional inequalities remain very pronounced across the European Union. GDP per capita ranges from 30% of the EU average in the French overseas department of Mayotte to 263% in Luxembourg.

There are clear disparities between the northwest and the rest of Europe. Southern Europe in particular has seen tremendous job destruction since 2008 (with the financial and debt crises), although there has been a partial recovery in recent years.

Central and Eastern Europe has the largest disparities between regions within the same country. The regions containing Warsaw, Bucharest, Prague and Bratislava richer than the average Western European region.

These figures show that we still very much need a strong EU Cohesion Policy and a polycentric European vision of territorial development. “Leaving no one and no place behind” should be our guiding principle.