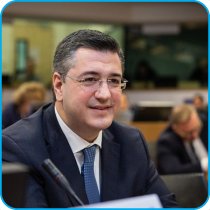 The Committee of the Regions elected a new President today: Apostolos Tzitzikostas. The Governor of Central Macedonia in Greece will lead the European Union's assembly of local and regional elected politicians for the next two and a half years.

Tzitzikostas served as Vice Governor of Central Macedonia and the Head of the Thessaloniki Metropolitan Area between 2010 and 2014, before being elected Governor. He has political experience at the regional, national and European levels, having previously served as a member of the Greek Parliament and as a member of the Committee of the Regions.

In his election speech, Tzitzikostas emphasised three priorities: bringing the EU closer to citizens and territories, responding to the demographic, environmental and digital transitions at local level, and modernising European democracy.