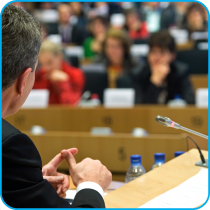 The recent hearings in the European Parliament of the 26 commissioners-designate were an opportunity to see the priorities and perspectives of the incoming administration of President-Elect Ursula von der Leyen. But what are some of the key takeaways for local and regional governments? Here is CEMR’s analysis.

Unsurprisingly given von der Leyen’s promise of a “European Green New Deal”, most of the commissioners-designate emphasised climate and environment issues, whatever their portfolio. Other oft-mentioned cross-cutting issues include gender equality and, to some extent, the Sustainable Development Goals (SDGs). On the other hand, local and regional governments were largely overlooked in these hearings.

Frans Timmermans, candidate to be the first vice president for climate action, second in importance only to President von der Leyen, will be leading the charge for a reduction of the EU’s carbon emissions of over 50% by 2030. The Dutchman said that a Just Transition Fund would be established to help regions become more environmentally sustainable and argued for a massive reforestation programme across Europe. Timmermans also emphasised the importance of the SDGs and would ask the Member States what is being done to achieve them.

The SDGs were also a major theme for Jutta Urpilainen, who will be in charge of international partnerships, the new heading for international cooperation and development. The Finnish politician emphasised that gender equalities issues must be mainstreamed into development policy and that she will work for policy coherence, making sure the Commission’s actions are in harmony across different areas. Urpilainen rarely mentioned regional and local governments, even as these will be key to ensuring general policy coherence and localising the SDGs.

As the commissioner for cohesion and reforms, Elisa Ferreira will be a key decision-maker for the future of local and regional governments in Europe. The Portuguese politician was keen to emphasise regions’ importance with the motto: “No regions left behind.” She assured that local stakeholders must be involved in partnerships for cohesion projects to be of benefit to all.

Ferreira also said that the cutting of cohesion funds in case of sanctions against an EU state – so-called “conditionality”, in case of violation of macroeconomic rules or the rule of law – would be done a case-by-case basis. Conditionality threatens municipalities and regions for actions of the national government, over which they have little or no control.

Maroš Šefčovič, in charge of interinstitutional relations and foresight, pledged to engage in what he called “active subsidiarity” involving the Committee of the Regions and local governments more throughout the policy cycle. The Slovak former diplomat also expressed support for the Regional Hubs initiative, by which certain regions take a leading role in coordinating and reviewing the implementation of EU policies at local level.

The commissioner-designate for equality, Helena Dalli, made clear that gender equality was high on the new commission’s agenda. Action would be taken immediately upon taking office to review the state of gender inequality within the Commission itself. The Maltese politician stressed that gender equality is key to achieving the SDGs. Dalli also said that equality charters are “essential”. This is an opportunity to promote adoption of the European Charter for Equality of Men and Women in Local Life, which already commits 1,600 local and regional governments to achieve gender equality.

Several commissioners-designate – notably Virginijus Sinkevičius for environment and oceans, Kadri Simson for energy and Janusz Wojciechowski for agriculture and rural development – scarcely mentioned regional and local governments at all. This warrants increased vigilance at a time when some in the Commission and in several national governments would like to significantly reduce the budget dedicated to cohesion policy.

Out of the 27 candidates, nine are former local or regional leaders, about the same as in the previous commission. A novelty has been the introduction of gender equality: 13 of the candidates are women, as against only eight in the previous commission. The new team is certainly not perfectly representative of the EU’s population however: the average age is 57 and none of the candidates is a person of colour.