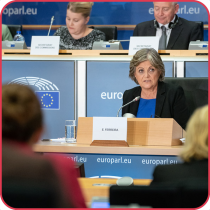 During European Parliament's hearing, Elisa Ferreira commits to ensuring "no region will be left behind" and that "reforms must fit with principles of cohesion"

Elisa Ferreira was confirmed as the EU's next Commissioner for Cohesion and Reforms on 3 October following a hearing at the European Parliament's Committee for Regional Development (REGI). The Cohesion Alliance – an EU-wide alliance calling for a stronger cohesion policy after 2020 – welcomes the commitments the Portuguese Commissioner took to protect cohesion policy after 2020 and demanded more attention be given to the crucial role of regions and cities in shaping and delivering EU priorities.

Cohesion policy - EU's main investment tool mobilising to deliver inclusive and sustainable growth by involving local stakeholders – is under threat because of budget cuts demanded by some Member States, as well as ongoing attempts to centralise governance that would jeopardise the involvement of regional and local governments.

The #CohesionAlliance partners therefore welcomed the Commissioner-designate's willingness to "campaign for the highest possible financial framework" after 2020, "protect cohesion policy" and ensure "reforms and cohesion reinforce each other", with reforms "fitting the principle of cohesion".  Her support for place-based development strategies and tools has been highly appreciated, particularly with regards to delivering EU's objectives on climate action. In this perspective, a new, place-based, Just Transition Fund, will play an important role in providing additional support for regions particularly challenged by the green transition (e.g. coal regions). But the new instrument should not lead to further cuts of the cohesion policy budget.

Concerns remain about the freezing of cohesion funds as a sanction to enforce fiscal discipline and the full respect of the partnership principle in the definition and implementation of investment plans 2021-2027. In order to secure the involvement of local and regional governments, the Alliance calls on the incoming Commissioner to reject any form of centralisation of the policy's governance and functioning and ensure new provisions do not weaken its capacity to adapt to local needs.

With regards to the funding of 2021-2027 programmes, the Alliance has urged EU institutions to maintain at least one-third of the future EU budget for cohesion policy, a position shared by the European Parliament. But, after the European Commission proposed a 10% cut to cohesion policy allocations, an increasing number of Member States are demanding deeper cuts to the Multiannual Financial Framework 2021-2027, which set annual expenditure ceilings for all EU policies.

The #CohesionAlliance will continue to call on Member States and EU institutions to ensure Europe's citizens can rely on a impactful cohesion policy after 2020 that is capable of reducing disparities, supporting the clean energy transition locally, and boosting the digitalisation of all EU's local communities.