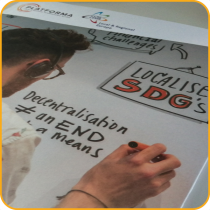 Just out: New study on how towns, regions and their associations bring international ambitions to territorial realities

Four years into Agenda 2030, it is clearer than ever that a global shift requires local action. But how are local and regional governments, and their associations, paving the way towards sustainable development? Find out more in the new study carried out by the Council of European and Municipalities (CEMR) and PLATFORMA.
This study entitled “How local & regional government associations bring the SDGs to life” highlights how towns and regions are bringing international ambitions to territorial realities.
The 10 recommendations of this study are there to take towns and regions one step closer to better localise the SDGs. The study also shows that no less than 73% of the European countries surveyed are now developing local indicators to assess the implementation of the SDGs.
Towns and regions are “tailoring, mainstreaming and living” the SDGs
“One year on, local and regional government associations have not just been implementing policies in service of the goals, they are tailoring, mainstreaming and living them. Local and regional government associations are increasingly being recognised as the torchbearers in embracing the 2030 Agenda,” said Frédéric Vallier, Secretary General of CEMR, lead partner of PLATFORMA.
“The clock is ticking – we only have around ten years left before we hit 2030. We need all hands on deck! Until then, we should be proud of what Europe’s cities and regions have already achieved,” added Stefano Bonaccini, President of CEMR, AICCRE & Emilia Romagna Region (Italy).
This new study is based on a joint survey conducted by CEMR, PLATFORMA and United Cities and Local Governments (UCLG) sent out to national associations of local and regional governments. It is a follow up of the 2018 study entitled “Sustainable Development Goals - How Europe’s towns and regions are taking the lead”.
More about #LocalizingSDGs
Local and regional governments represented in New York
European local and regional leaders from a CEMR-PLATFORMA delegation are calling to accelerate climate action and the localisation of UN Global Goals at the UN General Assembly. Read more.
Engaging citizens in Global Sustainable Development
PLATFORMA is presenting the 4th edition of the European Days of Local Solidarity (EDLS) at Europeaid InfoPoint Lunchtime Conference “Cities & regions: engaging citizens in Global Sustainable Development” on Wednesday 25 September 2019, 12:30-14:00. Read more & register
CEMR Congress on SDGs
Ten years ahead of the SDGs global deadline, CEMR invites you to its congress on SDGs in Innsbruck, from 6 to 8 May 2020. One of a kind, the congress will bring together the whole SDG family in one place: mayors, local and regional leaders, national governments, etc. Read the interview with the Mayor of Innsbruck, Georg Willi.

Translate
Note to the editor:
25 September is the Global Day to act for SDGs: it marks the 4th anniversary of the adoption of the 2030 Agenda for Sustainable Development by Heads of State and Government. But even though the 17 Sustainable Development Goals (SDGs) were launched by the United Nations, the targeted beneficiaries are citizens and its primary implementers are local and regional governments.