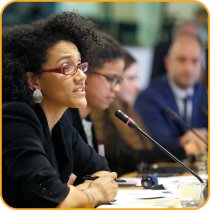 Without local and regional governments, the Sustainable Development Goals (SDGs) would only exist in theory. Towns, cities and regions translate the concept into practice, as they implement the SDGs on the ground.

But how does the local implementation of SDGs work? What are the challenges and opportunities encountered when localising SDGs? That’s what local and regional leaders discussed during a lively debate in Brussels on 11 April. The event was organised by CEMR, EUROCITIES and the European Committee of the Regions.

This debate was an opportunity for CEMR and PLATFORMA to present their joint study,  on the implementation of the SDGs at local level, and the 2019 survey.

“This study reflects the needs and priorities for the implementation of the SDGs at local level. For instance, the results show a strong correlation the between level of awareness of local governments and their active collaboration with central government,” specified CEMR Head of Research and Studies, Nathalie Noupadja.

PLATFORMA Director, Marlène Siméon, explained how such a study is a necessary prerequisite to assess the SDG performance in general. “All the SDGs have a local dimension. It is therefore important for local realities to be reflected in reports and decisions made around the SDGs.”

Following the discussions on the study, a political debate took place on the EU Reflection Paper “Towards a Sustainable Europe by 2030”. Talking for CEMR, the Vice-Mayor of Evergem, Belgium, responsible for international cooperation, Kathleen Depoorter expressed how Europe’s towns and regions feel this paper comes a bit late. “We have been waiting for it for more than three years,” she said. “There is no sense of urgency in this paper. 2030 is now.” Ms Depoorter then added that “Europe should show the way towards a new economic and social model of development.”

From implementation to assessment

The discussions then focused on the remaining question of how local government can assess their actions and initiatives on the ground. Representing Saint-Fons, a city of 18,000 inhabitants in eastern France, Lydie Gharib, presented how they are using the Reference Framework for Sustainable Cities’ (RFSC), a tool to guide cities on their own path towards sustainability.

CEMR Executive Director for European Affairs, Angelika Poth-Mögele, concluded the debate by saying: “Cities and towns are drivers for change, enablers of the 2030 Agenda. If we continue going in this direction, the rest of the world can no longer ignore it.”

You can answer the CEMR/PLATFORMA 2019 survey.
You can join the discussions on social media with the #LocalizingSDGs hashtag.
Discover the pictures of the event on Flickr (© European Union / Ph. Buissin