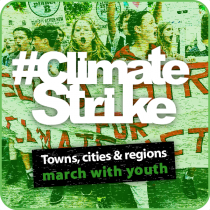 Towns, cities and regions march with youth and come up with fresh ideas

For the first time in Europe’s history, towns, cities and regions are marching along with young people from around the world in a Global Climate Strike for the Future. Six local government networks inspired by the youth’s call to action will join the strike on 15 March in Brussels. They jointly call on the European Union and national leaders to take the necessary steps to address climate change in a just and timely manner.

Their main demand: to take heed of calls by the Intergovernmental Panel on Climate Change (IPCC) to limit global warming to 1.5°C. According to the networks, reaching this overarching goal will mean divestment from fossil fuels, urgently rethinking the EU climate strategy and empowering local and regional governments.

Towns, cities and regions call on the EU to entirely divest from fossil fuels

The European Investment Bank (EIB) has disbursed €12 billion in fossil fuel projects since 2013. To adequately address the climate crisis, towns, cities and regions are calling on the EIB to completely divest from fossil fuels. They also call on the EU to do so with the Multiannual Financial Framework (MFF), in order to create a transformative transition fund. On top of this, they deem it necessary to make more funding programmes available, to replicate successful initiatives and to raise awareness of the benefits of climate and energy policies. This demand reflects a larger call for a shift in priorities: for the limitations of the Earth and the lives of future generations to take precedence over immediate wants and needs.

According to Europe’s towns, cities and regions, the EU must significantly step up and accelerate the overall energy transition, ensuring that rapid progress is made in decarbonising Europe’s energy system. Additionally, an adequately coordinated, durable, long-term climate strategy must be put into place. The energy transition will also have the added value of acting as a strong driver for European cohesion in the long run.

Policies cannot be functional if they do not take into account the needs and capacities of the towns, cities and regions who will be implementing and experiencing them on the ground. As the areas that will be most impacted, they are eager to contribute to and co-create solutions. To do so, the consistency of ambitions, needs and support between all levels of government is crucial. Local action remains the best way to meet the global challenge of climate change, as it empowers citizens and bridges the gap between communities and policy-makers. In a similar fashion, the Covenant of Mayors can play a crucial role in climate action on the ground.

Tine Heyse, City of Ghent, President of Climate Alliance stressed that: "With these climate marches, our children and young people are sending an important signal to all of us: we must do more and faster for more climate protection!"

President of the Council of European Municipalities and Regions and of the region of Emilia Romagna, Stefano Bonaccini, stated: “Climate change is causing fires, floods and storms in towns and regions around the globe. As mayors and local and regional leaders, we have a responsibility towards young generations, and we hear their call: we must act now to limit global warming to 1.5°C. That’s why we are joining the youth at the Global Climate Strike For the Future! We call on the EU and national governments to move away from fossil fuels. We call on them to work with the next generation of leaders, to invent the model of development that will secure life on earth for all.”

President of Energy Cities, Lord Mayor of Heidelberg, Eckart Würzner, declared: “We need a political transition to drive the energy transition. Enough discussion of targets, lighthouse projects and studies. We must now implement everything we have learned with the passion and relentlessness we see on our city streets every week if we are to meet the Paris Agreement targets.”

President of EUROCITIES and Mayor of Stockholm, Anna König Jerlmyr, stated: "I fully support the call of our youth for urgent climate action - both as the president of Europe's largest city network and as a private citizen. Because nothing less is acceptable at this point. I am very proud that many cities have already taken ambitious steps towards a net zero economy but limiting warming to 1.5C requires the involvement of all political levels. It is time that European and national leaders fully commit to and start working for a climate neutral Europe by 2050, together with our cities."

President of FEDARENE, Julije Domac, said: “Proud to follow the voice of the young - our tomorrow’s leaders and representatives of our future. For too long we have not been doing enough. Now is the chance to make things right and uptake sustainable solutions in all aspects of our society.”

Deputy Mayor of Tampere, Finland, and Member of the ICLEI European Regional Executive Committee, Anna-Kaisa Heinämäki, pointed out that: “As local leaders, we must not only listen to the youth, but truly hear their message. We cannot continue to allow inconvenient facts to be ignored for political reasons. We must show our future generations that science matters and that their elected representatives will design policy based on information from the scientific community. Climate change is a crisis that needs immediate action. As the governmental level closest to the people we have a duty to make meaningful, visible, and rapid change. I commend the youth taking action – local leaders hear your voice.”

Translate
About the networks

CEMR - The Council of European Municipalities and Regions

CEMR, the Council of European Municipalities and Regions, is the united voice of 130,000 local and regional governments, federated through 61 associations across 41 countries.

For more than 25 years, Climate Alliance member municipalities have been acting in partnership with indigenous rainforest peoples for the benefit of the global climate. With some 1,700 members spread across 26 European countries, Climate Alliance is the world’s largest city network dedicated to climate action.

EUROCITIES is the political platform for major European cities. We network the local governments of over 140 of Europe’s largest cities and more than 40 partner cities that between them govern some 130 million citizens across 39 countries.

Energy Cities is a community of 1,000 local pioneers located in 30 countries. We trigger a trustful dialogue between city leaders and EU & national institutions to accelerate the energy transition in Europe.

FEDARENE (European Federation of Agencies and Regions for Energy and the Environment) is the European network of regional and local organisations, which implement, coordinate and facilitate sustainable energy and environment policies. Regional and local agencies, ministries and departments working in these fields are represented in FEDARENE.

ICLEI - Local Governments for Sustainability is a global network of more than 1,750 local and regional governments committed to sustainable urban development. Active in 100+ countries, we influence sustainability policy and drive local action for low emission, nature-based, equitable, resilient and circular development. Our Members and team of experts work together through peer exchange, partnerships and capacity building to create systemic change for urban sustainability.