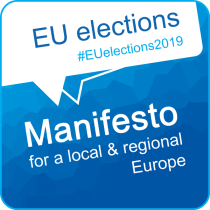 Local government’s manifesto: Cities and regions call on the EU to take a local shift

The uncertain political context in which European elections will take place is unprecedented: Brexit, populism, violence, climate mobilisation, fear about the future and mistrust towards politics...

The EU needs to take a local shift. This is in substance what Europe’s towns, cities and regions lay down in their “Manifesto for a local and regional Europe”, channelled by the Council of European Municipalities and Regions (CEMR). With less than a hundred days to go before the elections take place, we have outlined a series of proposals to make Europe more citizen-inclusive, locally driven and anchored in its territories.

Expressing his thoughts on why the EU needs to take a local shift, the president of CEMR and of the region of Emilia Romagna, Stefano Bonaccini, points out: “The EU is a union of peoples, above all else. It will only continue to exist if Europeans believe in it, and we must therefore build it with them. Nothing can replace a face to face dialogue with citizens. We suggest that each year on 9 may – Europe day – a citizens’ debate takes place in every town and city to discuss how the EU benefits us on the ground.”

On 9 April, CEMR will present its proposals during a high-level event with representatives from the main European political parties.

To further engage mayors and local and regional leaders into European politics, CEMR calls for the creation of an Erasmus programme for towns and regions. “This programme should allow elected officials and civil servants to understand the functioning of the European institutions and to exchange with their peers on local and European governance,” explains the CEMR President.

For equality in politics, parties should run and support women candidates

Considerable progress is also needed to bridge the gap between voters and decision-makers. In the EU, women are a majority among citizens but they remain heavily under-represented in politics: currently, only about 30% of mayors & 36% of MEPs are women. To change the current political structure, we call on political parties to run women candidates and to support them for the next European elections. The next European Parliament should reflect the reality on the ground and in its future legislation.

To contribute to women’s political empowerment, on 6 March, CEMR will launch the #Power2Her campaign.

We want the Sustainable Development Goals (SDGs) and the Paris Climate Agreement to become the guiding principles to succeed the Europe 2020 strategy. This will give a strategic direction to the EU. Furthermore, Stefano Bonaccini points out: “Taking into account that 65% of the SDGs cannot be fully achieved without the involvement of cities and regions, the EU needs to team up with us.”

Read a recent opinion article published by CEMR Secretary general, Frédéric Vallier, where he calls on the EU to take a local shift.

Traduire
The "Manifesto for a local and regional Europe" is available in: