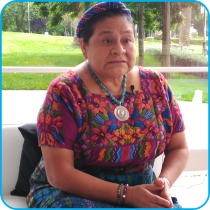 In the frame of this meeting, we have interviewed this iconic figure to discuss how to build communities that leave noone behind.

Why did you accept to speak at the CEMR conference on Equality, Diversity and Inclusion?

This was a great opportunity because those who participated in this conference are local government representatives, who are directly linked to the population, to education, to citizen participation and especially to the application of the concepts of equality, diversity and inclusion.

I believe that today, the world needs extraordinary platforms to work on such transcendental topics as respect for diversity, inclusion and above all the will of citizens, so that they integrate these values in their everyday attitude.

Your fight for the recognition of America’s indigenous peoples is a symbol of the fight against all types of discrimination. Europe is facing a wave of populism and nationalism which doesn’t prevent it from discrimination. What message would you like to convey to the conference participants?

First and foremost, diversity is our universal nature. We are diverse. The claim that we can coexist, based on reciprocity, on mutual respect, on the recognition of the other, on peaceful coexistence, is very important in the whole world, but above all it is a wealth that we have to learn to appreciate. The indigenous peoples have lived in the most inhospitable areas but we are not victims, we are human beings who live with Mother Earth, which we value.

Nowadays, there are migrants in Europe, and Europe has to fight against phobias. There is a lot of phobia, as well as a lot of bullying, especially on social media, there is a lot of negativity. We have to re-educate people and invest in how we educate. We have to invest in an education that allows people to complement each other.

Local elected representatives that take part in the conference are presenting concrete examples on how to integrate minorities and to achieve more equal societies. How can we ensure the inclusion of everyone in our societies?

The objectives of the millennium were very important, but their implementation matters the most. I believe the United Nations did not have the capacity to make these objectives known to citizens via municipalities. Municipalities are where people live, where they risk human rights violations, and where they are responsible for their own development. These objectives have brought us motivation, but we haven’t gone further.

Fortunately, in the area of women's rights, much progress has been made. I believe that Spain is an example of this. It has more women ministers, and we hope that with this presence of women it really feels the vibration of women participation.

In Latin America, we have achieved some progress concerning feminicide for instance; with laws that punish those who murder women just for the fact that they are women. However, there is still much to do. The elections can be interpreted as showing a rejection of women's participation. Some laws at local level support gender equality. The problem is, the law is not always successfully applied.

There is definitely a lot of work, but I am resilient. The role of municipalities is essential, because many initiatives can emerge from them, such as women's organisations. Moreover, the activism of women goes hand in hand with the progress we have achieved.