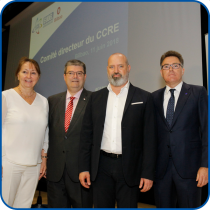 CEMR's Policy Committee meeting as if you were there

"These three days are a magnificient opportunity to debate and learn about equality, diversity and inclusion, elements whose importance is undoubtedly only going to increase in our society." It is in these words that the mayor of Bilbao, Juan Mari Aburto, welcomed CEMR Policy Committee members gathering in Bilbao, on 11 June. The event took place ahead of CEMR’s conference on equality, diversity and inclusion.

The participants were also greeted by the President of EUDEL and mayor of Getxo (Basque country, Spain), Imanol Landa, who stated "It is the moment to empower ourselves, through municipal associations. Let’s be an example of public commitment and excitement, to transmit to other young leaders who, in turn, inspire others that surround them."

His words were backed by the President of CEMR and of the region of Emilia-Romagna, Stefano Bonaccini : "Today, we face new realities concerning inequality, discrimination and social exclusion in people’s everyday lives. And yet, the vibrant energy for change shown by the local leaders and experts gathered at our conference prove that they can take impactful action on these fronts."

Later in the meeting, the members of the Policy Committee were invited to discuss and exchange views  on three of its fundamental aspects: state aid, public procurement and international trade agreements.

If you want to read this wrap-up with pictures, you can find all the photos taken during the event on CEMR’s Flickr account.

Members of the Policy Committee unanimously appointed the Deputy Mayor of Sant’Olcese (Italy), Gabriele Taddeo, as spokesperson on energy and climate. Kerava (Finland) city councillor Anne Karjalainen was appointed as spokesperson for digitalisation.

Our members adopted several position papers and responses to consultations

CEMR President Stefano Bonaccini presented the organisation’s first retreat  of representatives from local and regional government associations taking place from 25 to 27 September in Brussels. On 25 September, we are hosting a debate on the future of Europe with Members of the European Parliament and its President Antonio Tajani, as well as its Vice-President Rainer Wieland.

During the two following days, CEMR will be hosting its very first retreat. It will be a moment for exchange between CEMR member associations, EU institution representatives, as well as international partners, to find inspiration and help co-create CEMR’s work programme. There will also be an Executive Bureau meeting and a technical seminar.

Our Manifesto for the European elections

Less than a year from now, the next elections to the European Parliament will take place, and with them, the Commission will also be renewed. It is no secret that EU legislation has a huge impact on local government, which is why we have decided to publish a manifesto  for the European elections.

Worrying news: there is no mention so far of the role of local and regional governments in EU development cooperation policy after 2020. CEMR President Stefano Bonaccini called on CEMR’s national associations of local government to raise awareness on this issue. He called on them to exchange with the Permanent representations of their Ministry of Foreign affairs to make sure the EU will continue its support to local governance, decentralisation and territorial development in partner countries. This support can take the shape of funding for twinning initiatives between EU and non-EU local and regional governments.

The Deputy Mayor of Innsbruck (Austria), Christine Oppitz-Plörer, invited all delegates to CEMR’s next congress in Innsbruck, from 6 to 8 May 2020.

Our next Policy Committee meeting will take place on 10 – 11 December 2018 in Ludwigsburg (Germany), upon the invitation of the CEMR Co-President, Vice-President of CEMR’s German section (RGRE), President of Ludwigsburg County, Rainer Haas.

Traduire
Did you know? In order to guarantee a gender balance in its decision-making bodies, CEMR put in place a quota system: 40% of its members must be women.  Today, 46% of our Policy Committee members are women.