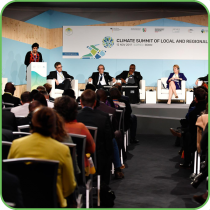 Why should the COP23 climate summit remain a states-only club when towns and regions are so deeply affected by climate change, and true hubs of innovation for climate solutions?

Let’s take our future, the future of the planet, into our own hands. That’s what towns and regions from the world over decided to do in Bonn, during the climate summit of local and regional leaders, on 12 November.

Local leaders are fully aware of their responsibility towards their fellow citizens’ environment, and therefore committed to ambitious measures to protect it via the Bonn-Fiji commitment.

Through this commitment, local and regional governments worldwide pledge to take measures to be more resilient, to cooperate with one another internationally, and to establish their own climate goals to help national governments achieve and exceed their own. They also explicitly call for more funding for climate investment as well as for the protection of climate related hazards, especially on coastlines.

CEMR took a strong stand for climate protection in Europe and beyond, stressing the strength of ambitious local goals for a climate-friendly future.

CEMR President Stefano Bonaccini*, expressed this very clearly via a column in online news outlet Euractiv: “Europe’s cities, towns and regions are emerging as the motor of the bloc’s climate efforts, in many cases going beyond the policies of their national governments. The EU needs to reflect these efforts in a more ambitious climate plan of its own: a new strategy to decarbonise Europe by 2050 that places cooperation between towns, cities and regions at its centre.”

President Bonaccini even had the opportunity to convey our priorities to achieve decarbonised societies in person to EU Commission Vice President in charge of the Energy Union, Maroš Šefčovič, whom he met at the conference.

The mayor of Seville and CEMR spokesperson on climate and energy, Juan Espadas, also took to the pen in an interview with us, explaining with optimism and ambition how “we still have a very demanding job ahead”.

CEMR also crossed paths with its American counterparts, Senior Policy Advisor to the Californian Governor Jerry Brown, Ken Alex, and the New Director of the Under 2 Coalition – The Climate Group, Tim Ash Vie; to exchange views on climate protection and explore the potential interest in joining the Under 2 Coalition initiative.

The Covenant Day: cities and businesses working together for a sustainable future

Local leaders and businesses from across the world got together on Covenant Day, 13 November, to share, exchange and find solutions for climate-friendly cities and economies: from financing climate change mitigation to creating green partnerships. CEMR was represented by its spokesperson on climate and energy, the mayor of Sevilla, Juan Espadas, at this event. The Covenant Day was organised by the Global Covenant of Mayors for Climate and Energy.

*President of CEMR, AICCRE and Emilia-Romagna

Translate
What is COP23?

The 23rd global summit on climate change, organised by the United Nations, taking place in Bonn, and hosted by the German Government under the presidency of the Fiji islands.

Also worth noting: if you speak French, you must read “Decentralised climate cooperation”, by PLATFORMA and AFCCRE.