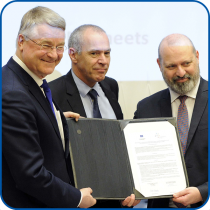 A new era of cooperation between the CEMR and the CoR

The CEMR and the European Committee of the Regions (CoR) signed a Memorandum of Understanding. The two parties commit to join forces for local democracy.

The agreement also includes a reference to decentralised cooperation in candidate, neighbouring and partner countries. CoR President Markku Markkula expressed: “CEMR and the CoR play a strong role in the same place towards Europe.Our collaboration to build the future of Europe is crucial.”

The agreement was signed during the debate on “Local and regional governments and the EU: partners to promote democracy and global development”, organised alongside CEMR Executive Bureau meeting, which took place in Rome on 24 March 2017.