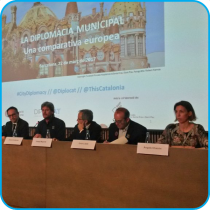 Local and regional networks in a globalised world: major players for diplomacy

Local and regional government associations play a vital role in municipal diplomacy: they strive to find solutions to the major global issues of our time, such as climate change or migration.

“City networks give legitimacy to local governments to be active at the international level.” CEMR Policy Officer for Governance and Citizenship, Carlos Mascarell Vilar, made this statement at a panel on the role of city networks in municipal diplomacy at the conference on “Municipal diplomacy: a European comparative” on 22 March, in Barcelona.

In this video message addressed to the audience in Barcelona, CEMR secretary general Frédéric Vallier explains how towns and regions contribute to global debates through local government associations. As he states in the video, “Mayors decided it was important to build relationships together even before the nation-states decided it was important. If we are united, we can influence the global agenda”.

As our founding father Edouard Herriot used to say: everything divides states, but everything unites cities.

Translate
This event was organised by Barcelona council and Diplocat, with the support of Sant Pau.