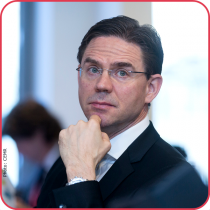 Commissioner Katainen: “The future of cohesion policy is in your hands”

“We, local and regional governments, call for an ambitious cohesion policy supported by adequate financial means to address the territorial challenges of the future.” This is the message CEMR Vice-President, Petr Kulhánek, mayor of Karlovy Vary (CZ), addressed to European Commission Vice-President Jyrki Katainen, during our debate on the future of cohesion policy on 28 March.

The debate, “Paving the way for a more territorial cohesion policy after 2020”, took place in Brussels, at the Council of European Municipalities and Regions (CEMR) on 28 March 2017. It comes at a key point in time, as the EU has just celebrated the 60th anniversary of the Treaty of Rome, and its achievements in the last 60 years. It is also the right moment to reflect upon the future of the EU and of cohesion policy after 2020.

In his address, Jyrki Katainen recalled that he will negotiate the future cohesion policy together with Commissioner for Regional Policy, Corina Creţu. He however pointed out that “the future of cohesion policy is not in the Commission’s hands, but in the hands of all levels of government. It is up to local government to design it.”

Highlighting the importance of a strong cohesion policy, CEMR vice-president expressed the commitment of local governments to fight for a secured budget for cohesion policy that is based on common EU objectives post-2020. The latter should also be aligned with the targets set for 2030 in some EU policies and in international agreements, like the UN global goals (SDGs), the New Urban Agenda and the Paris climate change agreement.

Regarding the budget for the next programming period, Commissioner Katainen pointed out: “I would be surprised if the next EU budget is bigger than the previous one,” as he referred to the fact that the EU is expected to soon be a Union of 27 member states. He expressed the following possibility for the future: “difficult trade-offs lie ahead, with a potential reduction of cohesion funds.”

Wording her concerns on this matter, CEMR spokesperson on Cohesion policy, Carola Gunnarsson, stated: “Cohesion policy should not become a variable for adjusting the EU budget. Mayors and regional leaders want to keep a territorial cohesion policy, it is part of the EU’s DNA. It is essential to reduce inequalities and focus funding on strategic priorities such as employment, integration and solidarity”.

All photos of the debate are available here. http://bit.ly/2ocsOGZ.

This debate is not a one-off and will surely carry on: follow it on Twitter with #FutureCohesion and @CCRECEMR.