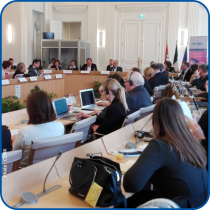 3 takeaways from our secretaries general and directors’ meeting in Nantes

The secretaries general and directors of CEMR’s member associations met in Nantes on 13 and 14 March 2017, to prepare the short and long-term political agenda of Europe’s towns and regions.

Here are the 3 main things to remember from the meeting:

2.    Local cooperation must be enhanced

The meeting was also an opportunity to discuss collaboration perspectives between CEMR, the Committee of the Regions and the Congress of local and regional authorities of the Council of Europe. Concerning cooperation, participants were able to discover the coalition project called LARGE (Local And Regional Governments Europe): a cooperation project with other European networks of local and regional governments.

3.    See you in Bilbao in 2018 at our event for equal, diverse and inclusive cities

The 2018 Bilbao conference for equal, diverse and inclusive cities is getting closer and closer. After CEMR’s event on Women’s Day, we are still working hard on the preparation of the conference, which was discussed in detail during the meeting of the 2018 Bilbao Conference Content Committee.

Traduire
The meeting of secretaries general and directors was held at the invitation of our French association, (AFCCRE). A keynote address was delivered by Vice President of Nantes metropole, André Sobczack.