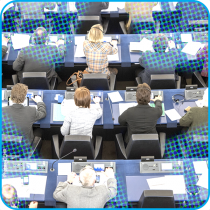 Did you know? Facts and figures on the new presidency from a local perspective

At mid-term, the European Parliament has just elected a new president, 14 vice-presidents and 5 quaestors, who, together, make up the Parliament's Bureau. But what is their background? Do they have a local touch? Find out below.

Best known for his role as an MEP or Commissioner, the newly elected President of the European Parliament, Antonio Tajani also has experience at the local level: in fact, from 2001 to 2008, Mr Tajani was a local councillor in Rome. See article here. It is worth pointing out that the outgoing president, Martin Schulz, was mayor of Würselen, a city of 40,000 inhabitants located in the district of Aachen (1987-1998). At 31, he was then the youngest mayor in North Rhine-Westphalia.

Among the 14 new vice-presidents, 5 held elected office at local or regional level (~35%). These are namely Bogusław Liberadzki, Sylvie Guillaume, Ildikó Gáll-Pelcz, Alexander Graf Lambsdorff and Ramón Luis Valcárcel Siso, who chaired the European Committee of the Regions from 2012 to 2014.

On another note, only 1/3 of the members of the presidency are women – no progress on this front compared to the previous presidency.

The European Parliament as a whole

Taken as a whole, more than half (~55%) of the European Parliament is made up of former local and regional elected representatives (local: 35%, intermediate: 5%, regional: 15%). This number is slightly lower at the Commission, where 12 out of 28 Commissioners have exercised a local or regional mandate (~40%).