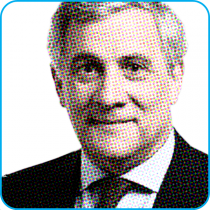 The results have come in: MEP Antonio Tajani was elected President of the European Parliament on 17 January 2017. Who is the man behind the President? What is his journey?

Best known for his role as an MEP or Commissioner, Antonio Tajani also has experience at the local level: in fact, from 2001 to 2008, Mr Tajani was a local councillor in Rome.

Here is the story of the Roman who went from local councillor to President of the European Parliament:

Antonio Tajani was born in Rome, on 4 August 1953. After studying law at La Sapienza University in Rome, he became a journalist and worked for several Italian media, such as Rai Radio 1 and Il Giornale – before making a significant turn in his career path to become an officer in the Italian Air Force.

In 1994, Antonio Tajani’s political journey started at the European level, becoming a Member of the European Parliament for Central Italy. His local career started in 2001, when he became a local councillor in Rome.

Having started in 1994, Antonio Tajani has walked in the halls of the European institutions for over 20 years. Back in 2002, he was even a member of the Convention on the future of Europe, a temporary institution that led to the project of a European constitution in 2003.

With such a history of commitment towards Europe, and in particular its future, the Council of European Municipalities and Regions (CEMR) calls on newly-elected President Tajani to work in partnership with local and regional governments for the future of Europe. Hand in hand, for a Europe that is closer to its citizens.

It is also worth noting that Mr Valcárcel chaired the European Committee of the Regions from 2012 to 2014.

Taken as a whole, the European Parliament is made up of more than half (~55%) of former local or regional elected representatives.

This number is slightly lower at the Commission, where ~40% of Commissioners have exercised a local or regional mandate.