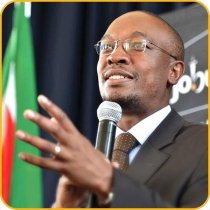 Election time: our global association needs a President who will…

In a few days, on 15 October, thousands of mayors and local leaders from around the world will unite in Bogota, Colombia, for the World Summit of Local and Regional Leaders. This summit is organised by UCLG, the world’s largest organisation of local government associations. It will also be the occasion to elect the President of UCLG, who will represent over 240,000 towns and regions worldwide. For CEMR, the choice is clear: our UCLG needs Mpho Parks Tau as President.

In Europe, Mpho Parks Tau has the support of many mayors, such as mayor of Paris, Anne Hidalgo, and mayor of Berlin, Michael Müller. In fact, the mayor of Paris even said of him: “Our towns and networks are at the forefront of a new global governance. Mpho Parks Tau has all of my trust to speak on our behalf and make UCLG an open, modern and inclusive organisation.” The mayor of Berlin stressed the fact that it is now time for UCLG to have a President from Africa: “As we are heading towards Habitat III, it is just appropriate for UCLG to be led by someone who comes from the fastest urbanizing region of the world. Parks Tau is my choice for UCLG President.”

CEMR, along with many elected representatives, is joining a global campaign in support of Mpho Parks Tau for the presidency of UCLG. Want to support Mpho Parks Tau? Use our campaign materials. Also feel free to follow the campaign and tweet your support for Mpho Parks Tau using the hashtag #UCLGCongress.

UCLG in a snapshot

If you are not familiar with UCLG (United Cities and Local Governments), here are a few key figures – UCLG represents:
UCLG is also a great network that defends the voice of local governments on the global stage, on topics such as climate, urbanisation, finances, and many other issues