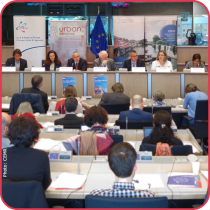 Each national delegation has to include a local or regional government representative during Habitat III’s final conference in Quito this autumn. Together, the representatives of the future Slovak presidency, the European Parliament and the Commission have aligned with CEMR and PLATFORMA’s position, presented during the seminar co-organised with the URBAN intergroup on 21 June at the European Parliament.

While the seminar was taking place, preparations were already under way for the final conference in Quito (Ecuador), where the new Global Urban Agenda should be adopted.

The European Commission representative (DG REGIO) Judit Torokne Rozsa supported the idea of having a local government representative in each national delegation. This idea was strongly endorsed by the Member of the European Parliament (MEP) and President of the URBAN intergroup Jan Olbrycht, who stated: ”Let’s fight together for a greater role for local governments.”

“We do not want one level to decide for everyone. Local and regional governments have to show the way”, confirmed Elena Szolgayová, representing the future Slovak presidency of the Council of the EU (EU2016SK). “It is our ambition to support you”.

As such, the Deputy Mayor of Cologne, Andreas Wolter, stated: “The European Union needs to support the demands of the Global Taskforce for local and regional governments (GTF) for the recognition of a special status for local governments within the governing bodies of the United Nations and UN Habitat.”


The Quito conference is a good thing – but what comes next?

“The Quito conference will not be limited to a simple approval of the agreement by states”, explained the representative of Habitat III, Tobias Kettner. “If it’s true that it will lay the foundations for a new Global Urban Agenda, Quito will also be the opportunity to focus on the action and implementation of the Agenda.”

To which CEMR Secretary General, Frédéric Vallier, replied: “With only a few months to go before the conference, our concerns are not only to know who will be responsible for what, but to see how national governments, towns, cities and civil society can work together once the agreement is signed.”

The representative from the NGO Habitat for Humanity, Deepali Sood, pointed out the importance of including citizens and stressed the need to assess the results throughout the process.

The director of PLATFORMA, Patrizio Fiorilli, ended the seminar by putting forward several proposals included in PLATFORMA and CEMR’s joint declaration. The main proposals are the following:

All eyes are now turned to national governments, as they will be the ones to decide on the final agreement.