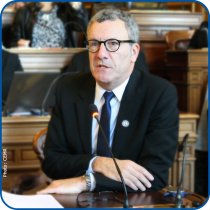 Local governments pay tribute to the victims of terrorist attacks

Mayors, local and regional elected representatives came together on 7 December 2015, in Paris town hall, to pay tribute to those victims of attacks in Paris, Ankara, Tunis, Sharm El Sheikh, Beirut and Bamako.

The tribute took place in the framework of CEMR’s policy committee. At this occasion, participants held a minute of silence in memory of the victims of the attacks committed in the city on 13 November.

The tribute led to the adoption of a declaration “Acts of terror: A call from European municipalities, cities and regions”. The declaration calls upon “national authorities to support the efforts of municipalities and regions in order that we may all, public authorities’ officials, civil society representatives, secular and religious leaders, act in support of security and peaceful coexistence in our territories, and against all forms of discrimination.”

The declaration also stresses the great deal of composure of the citizens of Paris and Brussels, and in particular that of mayors and local elected representatives who have provided support to people in their community while confronting-this situation with dignity and courage.

Opening a discussion on the matter, mayor of Brussels, Yvan Mayeur, gave testimony about the situation in the city with the terrorist threat level at its highest. “Brussels was under lockdown for a couple of days and on the highest state of alert over fears of a Paris-style attack by the militant Islamic State group. (…) Services were discontinued or reduced, causing major disruption to the lives of citizens.” Referring to local governments’ role, he stated: “Despite limited means at our disposal, towns must continue to experiment recipes for living together in multifaceted society.”

Deputy mayor of Paris, Patrick Klugman, added that: “These attacks must be construed as an attack on democracy. The 50 or so nationalities represented among the victims are a testament to that. (…) Local elected representatives have the responsability to forge closer ties among citizens.”