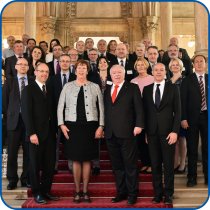 The secretaries general and directors of CEMR’s member associations met in Vienna, on 21 and 22 April 2015, to take stock of ongoing policy, statutory and budgetary activities.

The first day's meeting centred on managing diversity in European municipalities and regions. It featured presentations from Ursula Struppe (City of Vienna), on the Vienna Charter, from Kato Van Broeckhoven (VVSG), on strategies of de-radicalisation currently being implemented in Flanders, as well as from Friso Roscam Abbing (European Union Agency for Fundamental Rights - FRA).

On the second day, discussions revolved around CEMR’s internal affairs. Issues covered included CEMR's lobbying activities, the preparation of meetings of CEMR’s Executive Bureau and Policy Committee, with the latter to take place in Munich, and the organisation of the Congress of European Municipalities and Regions in Nicosia, from 20 to 22 April 2016 .

The meeting of secretaries general and directors was held at the invitation of the Austrian association of cities and towns (Staedtebund). Keynote addresses were delivered by Michael Häupl, mayor and governor of Vienna, honorary president of CEMR, and Annemarie Jorritsma, CEMR president.

Traduire
Photos of the meeting