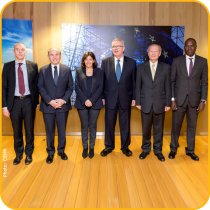 “For the first time ever, local and regional governments and the European Commission commit to work side by side to pursuit objectives that will contribute to achieve democracy, human dignity, equality, justice for all and in the spirit of solidarity throughout the world. Local and regional governments help shape strong local communities and contribute to economic prosperity and social and cultural well-being. We look forward to developing our programmes in cooperation with the European Commission to take this forward.”

On 28 January, five international networks of local and regional governments signed the first strategic partnership agreement with the European Commission Directorate-General for Development and International Cooperation. This seven-year partnership is a political agreement whereby the European Commission and signatories commit to take actions based on common values and objectives to tackle global poverty and inequality, and to promote democracy and sustainable development.

Local and regional governments represent the closest institutions to the citizens and offer significant expertise in terms of service delivery, building democratic institutions and effective administrations. They can also provide a long-term, country-wide vision on how to build inclusive societies as the actors with the necessary political legitimacy and the capacity to mobilise other stakeholders. This new partnership represents an important step forward for the local and regional governments’ involvement in sustainable development policies and the new post-2015 Development Agenda.

The signature ceremony took place in presence of EU Commissioner in charge of international cooperation and development, Neven Mimica, and the political representatives of the organisations involved:

The next seven years will put municipalities, towns, cities and regions and their representative associations in a leading role. It will enable local government worldwide and the Commission to join forces towards the same development goals, based on shared values: democracy, solidarity, equality and justice.

The agreement acknowledges the role of municipalities, towns, cities and regions as policy and decision-makers to define policies and contribute to addressing global challenges as well as implementing the shared global agendas at local level. The agreement represents the concretisation of the Communication “Empowering local authorities in partner countries”* adopted by the EU in 2013, which acknowledges the efforts made by local governments to actively contribute towards international development.

The five networks believe that the agreement comes at a most appropriate moment: 2015 will be a special year for development, marked by the adoption of new sustainable development goals. 2015 is also the European Year for Development, the first-ever European Year to deal with the European Union's external action and Europe’s role in the world. Finally, 2015 will be crucial for climate change with the conference of the parties (COP21) to be held in Paris in December. It is an opportunity for local government to show their development potential in partner countries and their common engagement for a better environment.

Note to the editors