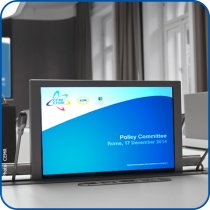 150 local and regional elected representatives and heads of national associations of municipalities and regions gathered in Rome on 17 December 2014 at the occasion of the Council of European Municipalities and Regions (CEMR)'s Policy Committee meeting.

On another note, the Policy Committee members adopted a declaration on the impact of European regulations on local and regional finances. They also approved CEMR’s multi-annual strategy, work programme for 2015 and budget.

The chairs of CEMR’s committees also reported on the implementation of the 2014 work programme, including Carola Gunnarsson on cohesion policy, Ewa Samuelsson on equality, Mairi Evans on youth.

Finally, members of the Policy Committee took note of the latest developments regarding the strategic partnership between CEMR-PLATFORMA and the European Commission. This partnership aims to contribute to enhanced governance and more effective development outcomes in EU partner countries through greater role of local and regional governments in development.