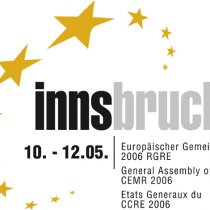 CEMR's general assembly on the future of public services in Europe

The future of public services in Europe will be the main theme of the Council of European Municipalities and Regions' general assembly taking place in Innsbruck, from 10 to 12 May 2006.
The first day, marked by the intervention of the President of the European Commission, Mr. Barroso, will focus on the role of local and regional authorities in Europe.
Public services will be the main topic of the second day: How to adapt to the demographic challenges? How to guarantee access for all to public services? How to learn from each other in order to meet the needs of the most vulnerable? Other workshops will draw on local democracy in South-East Europe or the involvement of the population in twinning activities.
The European Charter for equality of women and men in local life, a CEMR project, will also be officially presented during the third day of the general assembly. European local and regional leaders will be invited to sign the charter and to publicly commit themselves to concrete measures for gender equality at all levels of local life.
There will also be a special session on town twinning and another on the United Nations' Millennium Development Goals.
More than 1.000 participants from will attend, including:
. the Federal Chancellor of the Republic of Austria, Wolfgang Schüssel (to be confirmed);
. the President of the Committee of the Regions, Michel Delebarre;
. Members of the European Parliament including Jan Olbrycht, Oldrich Vlasak, Gilles Savary;
. Mayors among others Hilde Zach (Innsbruck), Ryszard Grobelny (Poznañ), Michael Häupl (Mayor and Governor of Vienna and CEMR's President), Wim Deetman (mayor of The Hague and CEMR first vice president) Wolfgang Schuster (Stuttgart), Barbel Dieckman (Bonn); George Giannopoulos (Rhodes)...
. Representatives of the European Commission;

There will be simultaneous interpretation into German, English, French, Italian, Spanish, Portuguese, Greek and Czech for the opening ceremony, the opening session, the plenary sessions and the closing ceremony.
To find more information on the event or to register online, please go to the website of the Council of European Municipalities and Regions' general assembly (CEMR).
Note: Journalists will have free access to the general assembly provided they are in possession of a valid, official press card delivered by the national association of journalists of their country.
Dates and place of conference: 10-12 May 2006 - Congress Innsbruck - Rennweg 3 - A-6020 Innsbruck