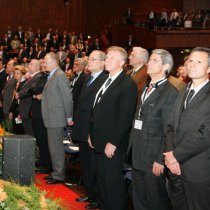 Once again the Court of Justice rules against local self-government!

This is now the fifth time in as many cases that the European Court of Justice takes a decision that goes against the interest of local and regional government in the field of procurement! This is how CEMR secretary general Jeremy Smith reacted to the latest ruling by the European Court of Justice (ECJ) on 12 May 2006.
The administrative tribunal of Lombardy (Italy) asked the ECJ for a preliminary ruling after two private companies brought actions against the municipality of Busto Arsizio. The private companies challenged its decision to award to a company called AGESP a contract for the supply, maintenance and management of heating installations in the municipality's building.
100% of the share capital of AGESP are held by another company, AGESP Holding, of which the municipality holds 99.98% of the shares. The authorities of Busto Arsizio argued that they did not need to issue a call for tenders since they fulfilled the two conditions set out after the Teckal case (1. The municipality must exercise control on the company similar to that it exercises over its own departments; 2. The essential part of the activities of the company is carried out in that municipality).
The ECJ concluded that the first condition is not fully met; it argues that the boards of directors of AGESP and AGESP Holding have broad managerial powers, and that therefore the municipality of Busto Arsizio does not exercise over AGESP a control similar to that which it exercises over its own departments.
The ruling is remarkable for its lack of information, explains Jeremy Smith. The municipality owns, directly or indirectly, over 99% of the shares of AGESP and AGESP Holding, and the Court argues that it does not exercise sufficient control on these companies without explaining its reasoning. We do not know for instance who appoints the directors, what the shareholders' powers are... The Court's only argument is that the Board of Directors of both companies 'have broad managerial powers"!
How can an authority fully own a company and yet not exercise control over it? I feel the Court does not quite understand the way municipalities are run these days; modern public sector management is by definition about giving their departments and legal entities a broad amount of discretion in the running of daily affairs.
CEMR believes that since the Court of Justice has repeatedly ruled against the principle of local self-government regarding the provision of local public services, it is necessary for European democratic legislation to set a sensible framework, enabling municipalities to assign tasks to the companies they own or control.
The ECJ ruling was published on the same day CEMR adopted the final declaration of its general assembly in Innsbruck. Over 1,200 local and regional representatives from 36 European countries agreed to the final declaration, including paragraph 20(d) that says that that local governments should be able to assign service tasks to companies they own or control without compulsory tendering, provided the company does not compete on external markets.
CEMR's final declaration adopted at the closing of its general assembly (Innsbruck, 12 May 2006)
Recent EC rulings in the field of public service concession

In January 2005, the Council of European Municipalities strongly criticized the European Court of Justice's decision in the "Stadt Halle" case as an unbalanced prioritization of the market over local democracy and self-government. CEMR called for the law to be changed to respect the principles of subsidiarity and local democracy.
CEMR press release on the 'Stadt Halle" case
In July 2005, CEMR reacted similarly after the Court of Justice's ruling in the Coname v. Comune di Cingia de' Botti case (C-231/03). CEMR stated that the decision would undermine long-standing 'intercommunal" arrangements, under which groupings of local authorities join together to deliver local services across their joint area.
CEMR press release on the 'Coname" case
The Italian municipality of Brixen, in Alto Adige, owns 100% of the capital of Stadtwerke Brixen AG, a company it has created. In 2002, the municipality granted Stadtwerke Brixen AG the right to manage a car park and to collect parking charges. A private local car park operator seized the Court of Justice, arguing that the municipality should have issued a call for tenders; the municipality replied that since it fully controls the company there was no obligation to issue any call for tenders. In October 2005, the European Court decided that, despite the fact that the municipality completely controls Stadtwerke Brixen AG, the company enjoys a high degree of independence; this means that the municipality does not exercise a control similar to that it exercises over its own departments. Therefore, says the Court, failing to issue a call for tenders is not compatible with Community law, bound to comply with the general rules of the EC Treaty including non-discrimination and transparency.