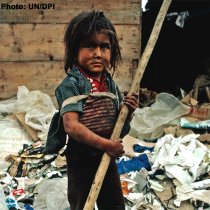 The Council of European Municipalities and Regions (CEMR), in partnership with the National Association of Portuguese Municipalities (ANMP), is organising a conference on local and regional government's contribution to the eradication of poverty, on 12-13 October in Lisbon.
The two-day conference will focus on the contribution of European local and regional governments to the achievement of the UN's Millennium Development Goals (MDGs). It will address issues such as the city to city cooperation and twinning, as well as the citizens' support to local communities in the field of the MDGs. Participants will also discuss the ways to reach the Millennium targets by the agreed deadline of 2015.
The UN's Millennium Development Goals consist of a list of global anti poverty targets. These targets were adopted by world leaders at the UN Millennium summit in September 2000; they include halving extreme poverty and hunger, achieving universal primary education, reducing infant mortality rate, reversing the spreads of diseases such as AIDS and malaria, ensuring environmental sustainability.
The draft programme of the conference 'Eight ways to change the world"
CEMR's worldwide activities
The conference will gather participants including:
. the President of Portugal, Cavaco Silva; or the Prime Minister, José Socrates;
. the former President of Portugal, Jorge Sampaio;
. the UN High Commissioner for Refugees (UNHCR), Antonio Guterres;
. the mayor of Lisbon, António Carmona Rodrigues;
. the mayor of Karlstad and chair of CEMR's working group on town-twinning, Anders Knape;
. several mayors and representatives of cities including Barcelona, Bonn, Lyon, Piedmont region;
. the UN Secretary General's Executive Coordinator for the MDGs, Eveline Herfkens;
. the Director of Enti Locali per la Pace, Flavio Lotti;
. representatives from the European Commission and from the United Nations.
Practical information

No participation fee
Languages: English, French, German, Italian and Portuguese
Location: Lisbon (Portugal) - List of hotels
Date: 12-13 October 2006
The registration form to be sent back to CEMR before September 22nd
Further information for the conference: Guilherme Johnston
The conference is organised with the support of the municipality of Lisbon, United Cities and Local Governments and the United Nations Millennium Campaign.