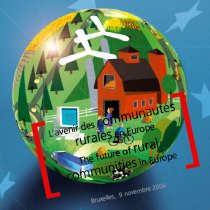 CEMR conference on the future of rural communities (9.11.06): "Changing policy and perceptions!"

Rural areas are not synonymous with decline. However, to respond to their needs, a policy shift reflecting the diversity of rural realities is needed. This is one of the main conclusions of the conference the Council of European Municipalities and Regions (CEMR) held on the future of rural communities in Europe, in Brussels on 9 November 2006.
Some 130 participants from 21 countries attended, including local elected officials, representatives from the EU Commission, the European Parliament, the Organisation for Economic Cooperation and Development (OECD), and the Finnish Presidency
One of the aim of the conference was to assess the current situation of rural communities in Europe and to identify the perspectives for their future. The conference took place at a particularly sensitive moment in time, marked by a number of developments: the reform of the structural funds, the future of the Common Agricultural Policy (CAP), recent evolutions related to public services as well as the forthcoming review of the European budget in 2008/2009.
Rural areas face important challenges and transformations - but not only disadvantages - also new opportunities. They represent 92% of the EU territory and 56% of the population in Europe. They also produce 45% GDP in the EU and provide 53% of total employment.
Louis Le Pensec, president of the French section of CEMR (AFCCRE), explained that rural communities are too often considered only as agricultural areas: The plurality of activities and their multiple uses renders these areas as modern as the urban ones, a land of the future. Rural territories are at the heart of the EU's competitiveness agenda: without reinforcing the development potential of rural communities alongside metropolitan centres, the EU runs danger of jeopardising the cohesion of its territories.
These words were reinforced by Roland Schaefer, President of the German Association of Towns and Municipalities (DStGB): we do not oppose supporting agriculture but we would like to see agriculture as one sector amongst many of our future rural economies. Rural areas, however, must not be seen in economic terms only; their patrimonial, cultural, natural, environmental and energetic components should be taken into better consideration in the framework of the European territorial agenda.
New EU policy should therefore put these areas in a more positive light. It should take into consideration the diversity of rural communities that requires specific and different strategies. A policy shift is needed towards a place-based, integrated approach, a -new rural paradigm', as Nicola Crosta of the OECD argued. This approach should not exclusively focus on agriculture but on the rural economy at large. It should encourage vertical and horizontal partnerships, focus on investments and not subsidies, and emphasise opportunities as opposed to disadvantages.
Michele Pasca-Raymondo, Deputy Director-General at DG Regional Policy at the European Commission, argued that one of the key success factors for rural competitiveness was the availability of quality public services for rural populations. This is the basis on which innovative economic activities can flourish such as the production of quality food products, renewable energy sources, the health sector and tourism.
CEMR will continue to provide a political platform to promote a balanced territorial development that reflects the needs and opportunities of both our urban and rural communities, concluded Angelika Poth-Moegele, Head of Policy at CEMR.