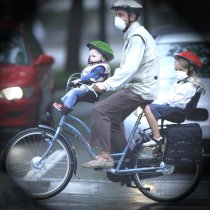 Directive on air quality: 'Address the cause, not just the symptoms"

The Council of European Municipalities and Regions (CEMR) has asked the Environment Committee of the European Parliament to adopt a stronger stance when it votes in 2d reading on the directive on ambient air quality and cleaner air for Europe, on 9 October 2007.

As representatives of Europe's local and regional government, we have two main points of concern, says CEMR head of Policy, Angelika Poth-Mögele. First, MEPs should reintroduce the rapporteur's amendment on a new article suggesting that the EU Commission should not simply address the issue of air pollution but should also take steps to reduce the emission of air pollutant (The amendment, art.31, was dropped in the 1st reading in September 2006). It would not make sense to call for improving air quality in Europe while not seriously tackling the sources of air pollution! Put it simply, the directive should call for EU-wide measures (1) especially in the fields of roads transport and agriculture, to reduce air pollution.

The second point raised by the Council of European Municipalities and Regions is broader. The European Commission should enforce emission reductions rather than just 'suggest" that Member States do so. Local and regional government cannot act alone on this issue; only if the EU and all the Member States take concrete steps can local and regional government help improve air quality in Europe.

CEMR's position paper was endorsed by local and regional political representatives from the whole of Europe at CEMR's policy committee meeting in Sevilla, last October.
(1)Examples of EU-wide measures aimed at reducing the emission of air pollutant called for by CEMR include the adoption of Euro 6 standards (emission standards for heavy duty vehicles) or EU-wide economic instruments such as fuel taxes. A significant part of local atmospheric pollution comes from road transport. To reduce air pollution effectively, local and regional governments need to be supported by an appropriate legislative and regulatory framework that involves other key sectors including the car industry and agriculture. Emission standards for cars must become more stringent more rapidly.

CEMR's letter to the members of the EP's committee on environment, public health and food safety