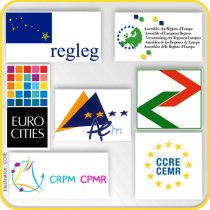 Seven organisations representing Europe's local and regional authorities addressed a letter to the Members of the European Parliament, on 3 November 2009, stating their concerns about the leaked European Commission Communication on "A Reform Agenda for a Global Europe (Reforming the Budget, Changing Europe)", prepared recently by.the European.Commission.

'The draft communication", say the local and regional associations, 'sets out a series of proposals which, if implemented, would challenge sustainable recovery and development in Europe. Those proposals do not reflect the goal of territorial cohesion, as introduced in the Lisbon Treaty."

The seven associations support the priority areas of action that have been identified as a basis for the future European budget: sustainable growth and jobs, energy and climate, and the EU as a global player. Indeed, they respond to a fundamental need for the EU to adapt to a global and multi-polar world. However: 'It is regrettable", continues the letter, 'that the draft document does not sufficiently address the objectives of social inclusion and social cohesion in its proposals."

The proposals for implementing these priorities within EU policies raise further concerns. The draft implies a reorganisation of EU regional policy, which would focus more on the poorest Member States, and suggests a trend towards renationalisation and sectoral reorganisation of EU policies. According to the seven associations, 'this would disregard the principle of territorial cohesion and ignore the demonstrable potential of integrated approaches at the territorial level."

While the European Parliament's Committee for Regional Development is meeting on 3 November 2009 to discuss the same draft, the seven associations are ensuring that EP Members are aware of their concerns, especially in view of the upcoming hearings of new Commissioners.

The associations would recommend that 'those concerns be discussed in the REGI and BUDGETS Committees before the hearings."

In particular, regarding the hearings, the letter proposes two questions to all relevant Commissioners for the next debates:

- What is your vision for the implementation of the principles of territorial cohesion and sub-national subsidiarity introduced by the Lisbon Treaty?
- How do you intend to take them concretely on board in your field of competences during your mandate?

Answering these questions, the future Commissioners will clearly demonstrate whether they wish to bring the European project closer to its citizens through a reinforced cooperation with regional and local authorities and with the European Parliament.