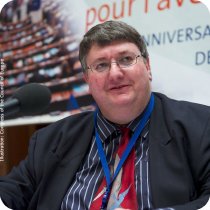 Keith Whitmore, who chairs the Council of European Municipalities and Regions' Committee on Democracy and Governance, was elected President of the Congress of the Council of Europe on 26 October 2010 in .
Keith Whitmore, outgoing President of the Congress' Institutional Affairs Committee, stated that he was proud to 'steer a new, reformed Congress for the next two years, and to reaffirm and strengthen its role as [...] the guardian of local and regional democracy in . 'In unity we represent the diversity of regional and local authorities in !", he said.
Keith Whitmore has been an elected member of Manchester City Council since 1979. Currently Deputy Chairman of the Greater Manchester Integrated Transport Authority, he is one of the leading councillors involved in European issues and is Head of the delegation of the Congress.
In separate votes, the Chamber of Local Authorities and the Chamber of Regions elected Jean-Claude Frécon, French senator for the Loire department, and Herwig van Staa, President of the regional parliament of Tyrol (Austria), as their respective Presidents.
The three Presidents will take office immediately for a term of two years.
Translate