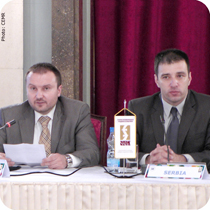 The Council of European Municipalities and Regions (CEMR) reiterates its aim to support its members heading towards European Union accession and to gain full recognition for the role local authorities can play in this process,.at the occasion of a meeting of its member association secretaries general and directors, held on 7 and 8 April 2011 in Belgrade, Serbia.
'The possibility for local authorities and associations of cities and municipalities to be active in international networks, associations and institutions, such as CEMR, is for us a unique resource," underlined SaÅ¡a Paunovic, president of the Standing Conference of Towns and Municipalities of Serbia (SKGO) and mayor of Paracin. 'Indeed, learning from the experiences of other countries via these organisations is invaluable especially when it comes to our efforts towards becoming a full member of the European family."
Moreover, the secretaries general and directors discussed the coming priorities in CEMR's political work with the aim of building a stronger organisation in the years to come.
Bruno GarcÃ­a de León, city councillor of Cádiz, Spain, also presented the City of Cadiz's preparations to date for CEMR's 25th General Assembly, which is to take place from 26 to 28 September 2012.
Zoran Alimpic, deputy chairman of the Assembly of the City of Belgrade, and DuÅ¡ko Radakovic, State Secretary from Ministry for Human and Minority Rights, Public Administration and Local Self-Government, were also present to showcase the work done by CEMR's Serbian association.