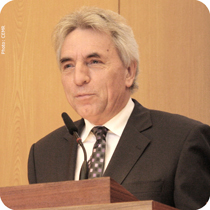 'The twinning movement has existed for 60 years now and must adapt to current changes and challenges. One of the key elements for the modernisation of town twinning is for municipalities to cooperate and work together to solve problems."
Such was the main message presented by Mayor of Cologne, Jürgen Roters, at the occasion of the third regional seminar on "Which twinning for which Europe", held on 9 November 2010 in Cologne, Germany.
The seminar, which focused on twinning practices in Central and Eastern European countries, was organised by the Council of European Municipalities and Regions (CEMR) and its German section (RGRE), with the support of the European Commission, and brought together 70 or so representatives from over twenty European countries.
Seminar participants notably agreed that the upcoming "Europe for Citizens" programme should be more result orientated, especially in terms of the valorisation, the evaluation and the appreciation of results so that twinning actions and initiatives may become more long term.
New forms of cooperation and communication were also identified as a necessity, and notably a heightened role for the media and for the use of social networks as a means to better attract and involve young people.
"Through these seminars, CEMR has launched a reflection process on the modernisation of the town twinning movement as the local reality and day-to-day lives of citizens have evolved since the twinning movement began in the 1950's," declared Sandra Ceciarini, CEMR Director of Citizenship and International Cooperation. "No other concept has been found to bring European citizens together and to bring them closer to the European concept. We, at CEMR, thus wanted to tackle the challenge of adapting twinning to today's Europe."
In this context, CEMR intends to come up with concrete proposals to be presented at the occasion of its Twinning Congress to be held in Rybnik, Poland, in 2011 in the framework of the Polish EU Presidency, where it intends to provide the Commission with a White Paper on the future of town twinning.
On its end, the EC launched on 27 October 2010, a broad online consultation on the next generation of the "Europe for Citizens" programme open to all interested parties until 5 January 2011. CEMR thus invites its members and others to both respond to the consultation and to spread the message of its existence among their own members and contacts.
Two seminars on twinning in Northern and Southern European countries had previously been held in Tallinn on 25 and 26 March and in Malta on 17 and 18 June. The conclusions following these three regional seminars will allow CEMR to prepare the political message to be presented at the Rybnik Congress.