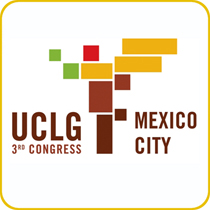 Local and Regional Leaders'World Summit: Time is running out!

The 3rd Congress of United Cities and Local Governements (UCLG), or more particularly the Local and Regional Leaders' World Summit, to be held from 16 to 21 November 2010, is fast approaching.
The event, which will take place in , will bring together a number of mayors, presidents of regions, local and regional officials as well as partners of local and regional authorities.
"We expect more than 2000 mayors and local authorities presidents to come and discuss the economic crisis, climate change as well as perspectives for cities and regions within 2030", said Marcelo Ebrard Casaubon, Head of the Federal District of Mexico City.
Also in parallel to this event, the Mayors Climate Change Summit, organised by in partnership with UCLG, is to take place on 21 November.
Practical information
Dates: 16 to 21 November 2010
Venue: , City,
Registration: Online registration until 10 November. After this date, registration only available on site in the main courtyard of the Palacio de MinerÃ­a