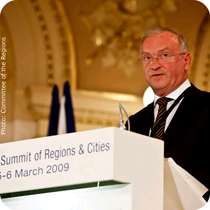 "No way out of the crisis without local and regional government"

The financial crisis and the cohesion policy were at the heart of the Summit of Cities and regions organised by the Committee of the Regions (CoR) on 5 and 6 March 2009 in Prague. Around 500 local and regional representatives attended the event.
CoR president Luc Van den Brande opened the summit stating that centralisation is not the basis for a dynamic and effective Europe. No recovery plan will ever be implemented properly without the timely involvement of the regions and cities.
The president of the European Commission José Manuel Barroso replied that the message was heard loud and clear: The European Council unanimously called against individual measures taken by Member States. José Manuel Barroso adde that the European Commission will provide €11.2 billion to Member States, their towns and regions, to help tackle the crisis.
European Commissioner in charge of regional policy Danuta Hübner presented the outcome of the consultation on the Green paper on territorial cohesion. CEMR president Michael Häupl stressed the importance of cooperation between towns and between regions: Networks such as CEMR are broader and more flexible than EU institutions; therefore they enable local and regional governments to meet, to exchange experience and to set up joint projects to solve the current crisis.
Delegates adopted the Prague declaration signed up to by the main European local and regional associations, including CEMR. The declaration stresses the need to involve all levels of government to solve the crisis, and calls on Member States to take a clear stance against national protectionism.
CEMR and the economic crisis
The impact on local and regional governments of the financial and economic crisis will be at the heart of CEMR's general assembly in Malmö from 22 and 24 April 2009. Some 1000 local and regional representatives are expected to attend. The general assembly will also focus on democracy and governance, demographic changes, cohesion and neighbourhood policies, as well as climate change.