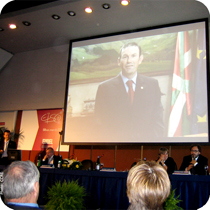 EISCO 2008 conference: Call for a master initiative to bring electronic services closer to the citizens

Local, regional, national and European elected representatives need to act together to turn information and communication technologies into a tool focusing on the need of the citizens and facilitating the organisation.of services. This was the main message from the EISCO conference, the annual meeting point for local and regional decision-makers and experts on information and communication technologies.
The use of the Internet has become a very common habit of most people, but the full potential of this tool has not yet been exploited by municipalities, cities and regions. E-government is too much associated with the rather limited use of ICT in the pure administrative sense. However, a broad range of locally provided services can have additional value by using modern telecommunication technology: health and care services, public transport, tourism, to mention only a few.
Freedom of knowledge should become the 5th European freedom, said Rudolf Strohmeier, head of cabinet of Commissioner for Information Society and Media, Viviane Reding, in the opening session of the conference. He welcomed local and regional governments' contribution to ICT-based innovation and a knowledge based society, but still much remains to be done.
Roberto Di Giovan Paolo, secretary general of the Italian section of the Council of European Municipalities and Regions (AICCRE), expressed his satisfaction that a conference on information society and e-government took place in Southern Italy and that the next EISCO conference will be hosted by Bilbao, another city in the South: The future of these countries is linked to the use of ICT, which has a huge potential for economic development.
In presenting the draft of the Naples Declaration 'Moving forward the Digital Local Agenda", Javier Ossandon, Honorary President of ELANET, (CEMR's network to promote new technologies, e-government, and to bridge the digital divide), made a strong appeal to actors at local and regional level to develop an action plan, to agree on a local information society pact and to create a forum with citizens and local stakeholders in order to achieve a real information society.
In his speech, the President of the Association of Basque Municipalities (EUDEL), Jokin Bildarratz Sorron, invited the audience to the 8th EISCO conference, to take place in April 2010 in Bilbao.
The speech of the President of EUDEL (Spanish version)